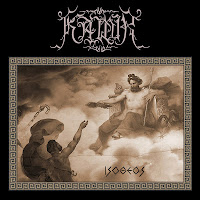 Where many metal bands initially pursue a traditional and derivative aesthetic in their writing, and later abandon it through progression due to outside influence, Greece's Kawir might be considered an opposite. This was initially a flawed but curious band whose use of instrumentation did wonders to enact idealized visions of their homeland's ancient folklore and history. This was the stuff of glades and ruins, gods lamenting their mortal lovers, mortals lamenting their mortality. Pure myth-stuff, and it was indeed a compelling prospect. After all, the world round, we are inundated with Greek myths and legends as a part of our education (or at least we were), so it's great to hear a band finally delve into that, especially one on native soil with a more immediate and interesting perspective on the rituals and lore involved. Sure, many other bands like Virgin Steele have explored the territory in depth, but perhaps not enough among the Hellenic extreme metal scene.

Kawir continue to journey through this collective cultural atavism in terms of their lyrical inspiration and themes, even with the title, Isotheos which translates to 'godlike'. Sadly, though, the music itself has continued to transform into a more standardized form of European black metal that has few differences from the wealth of Scandinavian, German and Italian bands clinging to the compositional qualities of the masters in the 90s. To be blunt: this should not really be happening, not for a band with 20 years behind it which has had ample time to develop its roots into distinct and unforgettable schema. Alas, ΙΣΟΘΕΟΣ becomes a victim of this affliction. Despite a few moments of genuine melodic bliss which recount the charms of their earlier work, this 5th full-length is too often reliant on the basis, exhausted blueprints of the genre without advancing or exacerbating them. The faster-paced tremolo guitar progressions (chords and single note picking) are more or less what you'd hear from a thousand other bands, the harsher vocals are not highly unique unto themselves, and the drums, while competent, aren't noteworthy. It's for this reason that the album's more atmospheric passages, like the chants in "Hymn to Winds" which accompany the more glorious, Triarchy of the Lost Lovers-era Rotting Christ-like rhythm guitar, stand out instantly.

Negatives aside, though, I must give Kawir some credit on the production here. This was a band with some pretty primitive sounding recordings in their past (not necessarily to their benefit), and from the sound of ΙΣΟΘΕΟΣ, you wouldn't know it. All instruments are represented in crystal clarity, from the nice crunch on the central rhythm guitars to the slightly fuzzed backing melodies. The deeper male backing choirs truly resonate through pieces like "Hades", and Greek bands (this one and Rotting Christ, at least) excel at incorporating this into the music more than perhaps anyone else in the genre. The rhythm section is fluid, though they rarely stand out. Wind instruments still maintain a solid presence here, especially in the short instrumental "Panspermia" where they flutter through the sylvan emptiness like naiads splashing through lakes; or the grandiose, 10 minute "Hymn to Apollo", which was hands down the most impressive track for me on this record, really digging out the Kawir that I wanted to hear. I only wish that these moments were more the 'rule' than the exception.

There is also quite a lot of variety throughout this, the band carefully measuring off the faster black metal surges against acoustics, or slower chord progressions. My issue just stems from the fact that about 50% of the riffs here are too familiar and uninteresting to justify themselves among Kawir's better use of atmospheric segues. If the riffs were more memorable during the stock black metal moments, then I'd be a lot more forgiving, but I just couldn't get into much of this. I wouldn't call it boring, though, nor a 'bad' album by any means. It's on par with the last full-length (2008's Ophiolatreia), and probably worth checking out if you've an interest in Greek bands who are actually invested in their cultural roots rather than the typical Satanism you'd expect in the field. A decent effort, and smooth enough on the ears, but I'm still waiting for this group to really arm itself with the past and deliver a truly evocative Elysium that I cannot experience elsewhere.