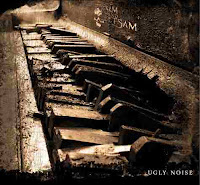 Sometimes it's a bit tricky to discern the trajectory a band has chosen, and with Flotsam & Jetsam those 'sometimes' equate to mires of stylistically outmoded experimentation which was frankly never cool to begin with. The big selling points to Ugly Noise were that the band was self-releasing it, a DIY/Kickstarter sort of operation where no label would muddy the waters between the artist and its fanbase; and that this featured the full Cuatro-era lineup, with 4 out of 5 original members from the classic 80s records alongside bassist Jason Ward (who has remained a member since '91). Now, if you ask me, I haven't a fucking clue why Flotsam & Jetsam would return to that easy accessibility period of watered down thrash/power saturated with banal radio hooks and weak riffing that often brought it out of the metal spectrum entirely. The 90s produced nothing but mediocrity from this outfit, despite their major label presence and any delusions to the contrary. They've never capitalized on No Place for Disgrace or written anything that approached that same benchmark of quality, but at least their 2010 effort Cold showed some signs of life; some pretty intense songwriting that simply wasn't consistent enough.

As soon as I saw the dilapidated piano on the cover, and read the self-deprecatory album title, I knew that this was going to be yet another mid-life crisis ordeal where the band is trying to maturate their material with a more friendly appeal to the masses, sort of a retread of where they were at on Cuatro. You get little traces of generic palm-muted thrash rhythms here or there, but nothing bordering on complexity or originality which they once possessed in spades. Half the time this is sterilized hard rock fare with a few misleading traces of progressive rock influences not unlike those awful Megadeth, Savatage and Queensryche records of the mid-90s, and when the band finally picks up the hammer it becomes a mixture of cheesy electronics and bad groove/bounce metal rhythms as on "Cross the Sky", "Run and Hide", etc. From the perspective of pure verse/chorus sculpting, they're not poorly written, but the punchy polish of the production and the lack of compelling guitars (apart from a few gleaming, atmospheric leads) really moor this album down into a box of tissues. About the only person here who is delivering consistently is Erik A.K., whose voice still carries a fraction of its distinct silk, fire and grit, but even he can't really save the songwriting process, especially not with pathetic lyrics of individualism and rebellion which wouldn't have even seemed deep to a castigated teen in 1988...oh wait, that was me.

Granted, Flotsam & Jetsam have never been poets laureate, but once they charge into a chorus like on "To Be Free" I found myself keeling over in laughter, and not the fun kind. The sad kind. Just take a brief tour of the song titles. "Rage"? "I Believe"? "To Be Free?" "Machine Gun"? "Carry On"? All have been implemented countless times by any number of artists, and despite being a mere aesthetic detail, this lack of creativity still contributes to Ugly Noise's underwhelming nature. I do not at all mind the little bits of experimentation, like the dark, deep pianos used in the opening title track, or the Queen-like choral syncopation striking out through "Rage", in fact I encourage such risks, but overall Flotsam & Jetsam really don't contribute to the thrash, speed or power metal traditions that birthed them, nor can they rival their own formative works. Tunes like "Rabbit's Foot" are simply too safe and disposable to take seriously, and a few catchy vocal lines just can't coalesce the experience into something worth the time. Generally, veteran bands like this will try to trace their steps and return to the eager, hungry sounds of their upward swinging youths, so it's a little strange that the Arizonans are interested in bringing back that sterile and uninteresting sound from the height of their MCA years. At one time this all might have helped push some units, but Ugly Noise is ultimately offensive to both its predecessor and the band's roots...

Not total shit, perhaps, but bad enough that I'd rather listen to My God. This just wasn't my thing, and while I can't ever expect No Place for Disgrace II to manifest, it'd be great if Flotsam & Jetsam could get back to kicking our asses again (which they very nearly did in 2010). I know they're capable. The question is: do they?