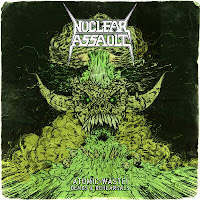 The storied career of a thrash titan like Nuclear Assault might naturally have lent itself to dozens of cash-in compilations or other mandatory corporate wetwork upon the fans, but let's give some credit that they've been relatively mum on this sort of release throughout their career. There was a 'greatest hits' type of package in the late 90s, and I believe there were some self-released demos, but High Roller records and the Nukes have put together quite a comprehensive package for Atomic Waste, and one that is well-suited to the long term fan who wants the band's legacy treated with some measure of respect. The caveat is that, even though many will no doubt prefer the acquisition of its vinyl version, the CD is actually the better deal, with a lot more tracks (10 in fact) and some material you're very unlikely to have heard...

Atomic Waste kicks off with the band's 1984-85 demos presented in reverse order, the latter of which sounds a lot better than the first, since it actually boasts a decent studio production and the tunes do not sound entirely different than their later incarnations on the full-lengths and EPs. On the other hand, I cannot so much vouch for the '84 tape, simply because the sound has decayed and it interferes with appreciation of the very uncouth, wild approach to vocals being taken there, or the frenetic tendencies of the noodling leads. More or less what you'd expect if resurrecting a thrash band's old demo tape from the early 80s and then transferring its flaws to a digital medium, something I've attempted to do in the past to a sound card and then given up on (since other people re-released them in superior format). That said, there's a sordid authenticity that diehards of misanthropic crossover/thrash violence and primitive recordings would sing praises for, and in the name of completeness, I'm glad to have both the demos in one location.

The aforementioned added tracks are a collection of instrumental rehearsals which benefit from a decent, if raw production standard. The guitars are a little bulky and crunchy and possibly even mildly out of tune in a few sequences, but hell if you wanted to karaoke "Brainwashed" in as vulgar a manner as possibly, why the fuck not use this one as your background music? Sure to scatter the poseurs in multiple directions. Same could be said of "Survive", "Technology" or "Rise from the Ashes", but of particular interest to me about this bonus material was the inclusion of a trio of unreleased tunes which are admittedly quite solid and would not have done a disservice to the Game Over or Survive era if they'd been flesh out with lyrics and better leads (the 1st and 3rd of these cuts are pretty sweet). Like the other, better known cuts, the guitars are raw but viable, the drums potent and really all that's missing is the grating anguish of John Connelly.

Atomic Waste is not going to win the band any new fans, of course, and in every case, the later recordings of this roster of tunes (where they appear) are superior, so there's a dearth of value if you're seeking out rare vocal gems, a covers album or other such compilations. This is really meant specifically for the completist, and to that extent it's not a disappointment. Perhaps a bonus disc compiling their singles might have made for a better bargain, but as it stands this is solid enough for what it represents. My only hope is that Nuclear Assault will listen back through this material themselves, reexamine their gifts as songwriters from the 85-89 period and reembark on a tour of asskicking that will help me flush that execrable comeback Third World Genocide from my guts forever.