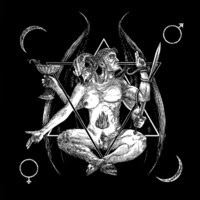 Anal Blasphemy is one of numerous projects involving the prolific Molestor Kadotus, who has been one of the most active proponents of the Finland underground, not only through his own label (Hammer of Hate) but also having worked with a number of acts like Baptism, Calvarium, and Valoton, and a handful of acts abroad like Drowning the Light. He is joined here, on this third opus of disgust, by a few of the other label artists, namely Kryth from Pure Evil on drums and vocals, and Possessed Demoness of Anguished, who also provided her wretched rasping for the entirety of "Lust for Satan". I'm sure the sound of this band will surprise no one: pure, primitive, tainted black metal to spit in the eye of all that is hallowed and beautiful, before penetrating the skull behind it.

I'm also sure that, if you've seen any of the band's perverse and often seductive album covers in the past (check out the Filth Union in Desecration or Pure Blasphemy splits and try not to stiffen), or read the song titles here, that you'll realize this is black metal of the lewd and Anti-Christian persuasion, sort of a more barbaric and unwashed spin on the whole Impaled Nazarene/Marduk Fuck Me Jesus thing, an ugly and unapologetic eroticism not fit for mainstream consumption. However, what totally threw me for a loop is just how well this record balances its blackened grime and punishing primacy with a strange sense of atmosphere delivered in the random samples and screams, and a few of the lighter, subtly melodic guitar progressions (as in "Perverse Madonna, Filthy Magdalene"). Anal Blasphemy is crude at its core, with a raucous guitar tone that resembles a dark, reeking, offal and vomit-soaked alley behind a strip club, sort of like Beherit, Archgoat or Hellhammer sauteed in goat semen and smut. The lyrics and themes revolve around sodomy, succubi and Satanic sexuality, par for the course, but despite itself, Perversions of Satan actually ends up seeming more well-rounded and interesting than one might otherwise suspect...

The performances here are all around great, if simple. Kryth keeps his drums raw and airy, hovering in the din below the crunch of the guitar to create that distancing sensation I enjoy in a lot of underground black metal. Kadotus has a firm, hoarse and muddied rasp which moors the music in a forceful anchor, while Demoness creates a great contrast in her track with her distinct, post-Burzum screaming, and even mixes is some orgasmic clean notes to mix that up. There are also some pure death metal vox on tunes like "Black Cum Absolution". The bass doesn't offer much by way of compelling lines, it's more or less saddled by the filthy guitar tone; but the samples add a lot of strangeness to the record, even if I can't understand them personally. All told, though Perversions of Satan isn't the most sinister and explosive album you're like to hear from the Finnish dark side, it was a nice balance of warmth and discomfiture, like gestating in some infernal womb until the time of your violation and searing in hell-sauce has arrived. Nothing truly novel, and tunes like "Vomit the World" might have their share of familiar riff patterns, but they're unclean, deplorable, uncompromising, and entertaining for the purist.