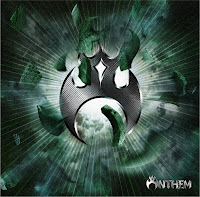 What's always so astonished me about Japanese entertainment is just how meticulous the country's artists are, across many mediums, at assimilating and regurgitating culture from abroad. That is not a gripe, because in many, many places they actively improve upon the subject matter and evolve it to another level. Metal is a great example of this process, and Anthem no exception. In the early 80s, they took their queues from Deep Purple, Judas Priest and later Ozzy Osbourne's solo records and really ran with the style, producing a long string of quality records that only took a dip through the 90s, when the band was largely inactive (thus avoiding most of the metal slump of that decade). When they returned in full force for the 21st century, their roots had eventually transformed them into a fusion of traditional/NWOBHM, power and party metal with something for nearly everyone, and since that point I can't recall a single outing which didn't have at least SOME great songs...peaking with the surprisingly excellent Black Empire in 2008.

If I've any complaint about the latest and 15th full-length Burning Oath, it's that to an extent Anthem are playing it safe here. A number of verse and chorus sequences and vocal melodies here stick pretty close to those we've heard before over the last decade, and there must have been 4-5 points on the record in which I felt my internal fanboy about to erupt into the chorus of "The Voices" or some other amazing tune they've written. It's not that note for note they adhere to the same blueprint, but they seem to flirt with such similar structures that a lot of the tunes' riffs and vocals could be interchanged with some previously released. That said, this is probably the ONLY complaint I've got with the new album, because in just about every other department the band excels with jaw dropping precision. Burning Oath is so bloody good that you have to wonder why Anthem is not a household name among traditional metal fanatics? Is it the language barrier which makes the lyrics a bit hard to swallow even when they're in English? Is is that they're just too damn polished and lack the characteristic flaws of cult recordings? Or is it that people seem to have settled into a limited array of popular artists and there's just no more 'room' left? Because I will say it here: Burning Oath, and really almost ANY Anthem record of the past decade has been exponentially more impressive than what Judas Priest or Iron Maiden have put out lately, even if they don't have the safety net of having 'been there first'.

In terms of pacing, production, and enthusiasm, you are not going to find a more professional outlet than this 30+ year veteran. In particular, I've got to point out the performance of axeslinger Akio Shimizu who is hands down one of the most prominent and skilled lead players the world over. His techniques are like a love triangle between Randy Rhoads, Yngwie Malmsteen, and Eddie Van Halen. Technically impressive, catchier than most of the rhythm licks, emotionally resonant and exciting. A beautiful balance of both classical and rock guitar fundamentals, spinning that old 80s verve into the present and future. But this is NOT a 'shred' album, because all of Akio's acrobatics complement the rhythm progressions, and they take center stage here with ample force. From the Judas Priest/Accept/Primal Fear power metal chugging in "Evil One" or "Life of Crime" to the more spacious chords and harmonies of something like "Unbroken Sign", you never get the hint that even one note is misplaced. Not to say that every riff sequence is dazzlingly memorable or innovative, but when you take a step back to look at the overall structure of the album, Anthem never bites off more than it can chew and this is yet another incessantly reliable set of songs.

Of course, Shimizu's playing doesn't carry the album by itself. He's got the support of one of long time bassist Naoto Shibata, and then drummer Hirotsugu Homma, who came into Anthem around the same time as Akio. The bass lines hear are nothing out of the ordinary, but the tone is muscular just like the best of that whole Teutonic, Priest-inspired scene, and it'll continuously clout you between the ears even if the note patterns don't stand out far from the guitars. It'd be hard to imagine a better drum mix for this super-polished style, but there aren't a load of crazy fills or anything, just strenuous rock and metal beats flush with the riffing. For not the first time, a number of orchestral synthesizers, strings and bells and such are incorporated here for atmosphere, usually in the intros to tunes like "Get Away". It's not a full-on 'symphonic' metal suite here, and the rock instruments take center stage, but there's certainly enough dressing for fans of the more epic power metal scene, without the cheesy competing guitar/key leads and others that generally transpire.

This is now Ezio's 10th album with Anthem, and he sounds pretty consistent with Immortal, Heraldic Vice of Black Empire. The guy's not a screamer on a Halford scale, but what he might lack for range he always makes up for in passion and closely knit melodic lines that are almost always catchy, even if they often seem redundant with past tracks. His inflection also holds up quite loudly for sustained notes, and I personally love the accent that always creeps through, it's one of the major reasons groups like this and Loudness are so distinct and timeless. I generally don't try too hard with the lyrics, because my Japanese is far from perfect and when I attempt to understand them in English the imagery doesn't always fit my Western sensibilities (a common issue in song translation between the two tongues); but at the very least songs like "Double Helix", "Struggle Action" and "Face the Core" seem pretty unique for this medium. Anthem is a band immersed in a modern world of social networking and technology. They're about as metrosexual as you're going to find in traditional heavy/power metal, so don't expect flowery songs about trolls and unicorns. Not that I have a problem with all of that, but I can ride the T in the morning with this stuff blasting from my headphones and feel like it's somewhat relevant to what's happening around me.

Just about every song here is good enough to sit through repeatedly, but particular favorites were "On and On" and "Face the Core" with their crispy, crunchy verse rhythms and uplifting chord escalation; "Ghost in the Flame" for its strange, pumping bass, bluesy swagger and atmosphere; and "Life and Crime" which brings out that German-loving banger within me and makes me want to flip over a car with my bare hands (though I admit that primary riff sequence isn't a hell of a lot different that several Primal Fear or U.D.O. have released). Also, every single fucking lead guitar sequence chokes me up with envy. The worst you can say for Burning Oath is that it's barking up the same tree as the last five albums, but all of you J-metal diehards into Loudness, E.Z.O., Blizard, Saber Tiger, X Japan (sans ballads), (old) Earthshaker or even the more symphonic outfits like Galneryus, Balflare and Concerto Moon should at least give this disc the opportunity to win you over. Low on originality perhaps, but Tokyo Tower-height in quality.