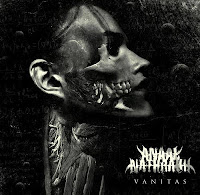 I'd hate to think of Birmingham's Anaal Nathrakh as a band that could ever stagnate. They've brought such intense moments into my life, from the utter annihilation of their debut The Codex Necro through the more melodic, mutated songwriting they achieved with In the Constellation of the Black Widow. This was once one of the most hopeful voices (or more accurately, barrages of sickened voices) in the spectrum of 'new extremity' that dawned with the 21st century, and their ability to mash up black, death, grind, noise and even some power-violence or extreme d-beat hardcore aesthetics has afforded them a level of nuance and creativity not too common in any of the parent genres. So then, why is Vanitas the least impressive album they've produced in years?

Simply put: because it's more or less a rerun of its two predecessors. Passion was hardly a record of heavy risk-taking itself, and merely a slightly better overall tweaking of Constellation, but this latest outing really seems to be scraping the bottom of the bone-mill in terms of its riffing selection. There are still a handful of moments in which the band flexes its knack for experimentation, like the techno drum breakdown in "To Spite the Face" or the nearly djent-ish, dirty grooves pummeling through the heart of "You Can't Save Me, So Stop Fucking Trying", but for the most part it 'plays it safe' with the streaming, tremolo savagery of post-millenial black metal they've been pursuing since the start. The duo excels at creating texture within their riffs, with a bright tone that lends itself well to both the sinistry and higher pitched, melodic phrasing, and they slather this with enough of their grunts, snarls and decaying screams that they certainly haven't lost that sense of tension; but for Anaal Nathrakh, it just seems like old hat, and not a particular fancy one you'd want to wear out at night while clubbin'.

Variation and competence aren't the issues here. Tracks like "A Metaphor for the Dead" and its howling, atmospheric vocals ensure us that the band are still messing with tempos, and have no interest in bombarding us with endless cycles of the same blast beats and stormy guitar progressions. But even there, much of the chugging groove is just too redolent of a thousand other metalcore-styled breakdowns that quickly pass from the memory; and this isn't the only instance on Vanitas, where often some brazen assault will be followed up with a banal palm muted passage that fails to impress beyond how it contrasts the surge. The programming of the drums is still quite intense without being intrusive, and Anaal are one of the best bands at handling this with an industrial sheen that never seems to overt or distracting for the conservative black metal audience. Not that it's ever been the highlight of their sound, but the bass lines here are quite indistinct, and the vocals seem redundant with those used on better Constellation tracks, only less catchy.

There are still plenty of things to admire about the duo, in particular the abusive poetry of their lyrics, which has a lot more in common with modern grind and artcore than traditional black metal and thus has more of a direct relevance to the cross-pollinated audience. Though my enjoyment of Vanitas has steadily diminished since I picked it up earlier in the Fall, I can't say it's because they lack energy and enthusiasm. This is voracious, frenzied music which continues to bastardize numerous niches into a contemporary fist-fight, but each time I listen through I feel like the songs pass on by without much lasting impact. First one, then another, and by the time a few memorable spikes of riffing arrive I'm already well deep into the 38 minute playtime. Hard to believe, yet this is a case of being 'overwhelming' and 'underwhelming' simultaneously. A flood of hostile songs that fail to stick. Not the first time I've felt the latter reaction towards an Anaal Nathrakh disc (their 2004 and 2007 albums also left me wanting), and I think this pretty much provides a 'conclusion' to the sound they've explored over the past few years. Looking forward to the next evolution.