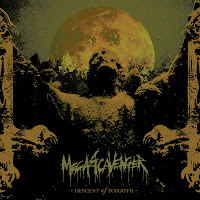 Megascavenger is yet another of the myriad Roger 'Rogga' Johansson projects, and one of the newest. It's been a busy year for the Swede, with at least a half dozen releases under his belt, from the exceptional (Putrevore's Macabre Kingdom) to the acceptable (latest from The Grotesquery and Revolting) to the downright average (the ghostly death grind of Humanity Delete). Somewhere in the midst of all these recordings he's managed to eke out an additional, monstrous old school death metal act and invite a few of his friends among the underground royalty to help flesh it all out. Where to place Megascavenger in the Rogga pantheon? Where other acts in his retinue might represent overt tributes to his Swedish peers and forebears, I like to think of this as a meatier homage to something like Bolt Thrower or Asphyx.

You can expect the typical traits out of Descent of Yuggoth: solid, effortless production that seethes in its own boiling atmosphere, and a riff-set which is both unashamedly derivative and entertaining. There is a load of grime on the guitar which seems like churning blood and sludge, but he also incorporates some melodies to counterbalance the low end domination, and a slew of guest leads from Patrick Mameli (Pestilence), Jonas Lindblood (Puteraeon, Taetre) and Eric Daniels (Asphyx). The album measures off its slower grooves and faster blitzes in balanced succession, and it ends up feeling like a more a mix of Realm of Chaos/War Master era Bolt Thrower or The Grand Leveler Benediction if it were molded with a more modernized production redolent of Autopsy's first two discs. The guitars are abrasive and intense, the bass like a toxic ooze slinking alongside the drums, and the vocals are Rogga's general low-end gutturals and don't necessarily distinguish themselves from numerous of his other projects. Here, too, he is assisted by a few of the old timers: Paul Speckmann (Master), Marc Grewe (Morgoth), and of course Dan Swanö. My one regret is that they're not all used more often, to create a sort of brutal Hear'n'Aid of barks and growls.

As it stands, though, Descent of Yuggoth is a crude, crunchy album which succeeds thanks to how it front loads a lot of the best tunes: the tank-like treading opener "Nihilisticon" or the bouncing bombardment of "Catapulted Through Aeons" to name a few. Not quite a 'cavernous' style album like so many that seem all the rage in recent years, but 100% committed to satisfying the nostalgic death metal crowd who largely disregard aesthetics post-1995, with the possible exception of the production values that are tremendous here. My one caveat is that everything this album does, I felt Rogga and Dave Rotten did better with the Putrevore sophomore. The sounds of the two albums are not entirely the same, but the riffs and the overall mix there was just so staggeringly, motherfucking unbelievable that I've been spoiled on some of his other works. Riff for riff, this isn't quite that consistent, and a few times I felt myself nodding off on the later half of its content. But it certainly stands out more than a few of Roger's other recent works like Bloodgut, Bone Gnawer or Humanity Delete, and you could do a lot worse than this crushing collection of Lovecraftian caveman hymns.