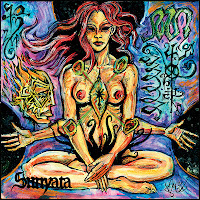 The previous Acrimonious full-length, Purulence (2009) was not one I derived much enjoyment from, a fairly typical Scandinavian styled black metal disc which never really distinguished itself with strong composition or even just damn good riffs. Having said that, the Greeks have rallied, regrouped, and produced a far more poignant and compelling offering in Sunyata, perhaps not something as riveting as Hellenic masterworks like Triarchy of the Lost Lovers, Scarlet Evil Witching Black or the latest from countrymen Spectral Lore, but nonetheless a proficient, multi hued opus which should garner them some attention through the underground. It's not exactly a paradigm shift away from its predecessor, and it's not composed of wholly novel aesthetics, but there is an unshakable sense of mystical fulfillment here which stands up to numerous listens with little hint of decay.

For one, the ambient and black metal components really gelled through this release, the Greeks employing a clear dark classical influence, through both the standalone pieces like the intro "Nexus Aosoth" with its grim string swells, and the subtle and complementary synths and effects used to heighten the riffing surges. Even though the guitars aren't anything we haven't heard before among Norse and Swedish black metal royalty, the tone of the chords is so level and dense that they really stand out against the echoing, clamorous vocals and the polished if intense drumming. Bales of melodies and harmonies are constantly writhing above the flood of the rhythm guitar, and in truth there's a lot of intricate, acrobatic groundwork here which draws the ears far more than on the debut. The general quality of the riffs might not be the highest or most memorable you'll apt to encounter in this field, but there are at least a dozen standouts spaced out among the hour of music that create anticipatory highlights. Acrimonious is not yet a band one would turn to for astounding leads, but the contrast of rich dissonance, brighter melodies and loads of variation is intriguing enough.

Bass lines have that hint of progression and groove to them which lends itself well to the exotic ritual and introspective grandeur felt through worldly black metal, once again creating a subtext of progression and exploration rather than merely aping the rhythm guitars. The drums are tight and fill-heavy across all tempos, with a nice sheen of reverb that helps them cut through the glinting, harried guitar work; and the vocals are possessed of a solemn, soaring angst which breeds a lot more character than the standard rasp would have been able to achieve over these tunes. It's full-bodied, rapturous and works well with the choirs and other distractions the band uses to balance off the aggression of the core instruments. In short, there's a good deal happening throughout Sunyata, and thanks to the production values, you'll be able to discern it all. Much of the music is accessible, yet there's more to greet you with each successive spin, not to mention the strength of its passionate occult lyrics. Tracks like "The Hollow Wedjat" will prove a thrill for fans of mid to late-90s Emperor, and I'd very much recommend the album to those who enjoy the other, more ambitious Greek outfits like Spectral Lore or Acherontas, the latter of which several of the members were once involved in.