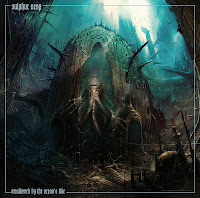 H.P. Lovecraft and his morbid mythos are hardly a novel theme running in metal these days, and in fact a multitude of songs and entire concept albums have paid tribute through either direct translations of he and his followers' tales, or creative interpretations, across just about all the sub genres, from heavy and doom to black and death metal. So the gorgeous cover artwork and title to Sulphur Aeon's debut Swallowed by the Ocean's Tide are quite overt in their inspiration, as are the solemn chants through the intro piece "Cthulhu Rites", but I really have to hand it to these Germans: this is by far one of the best albums to date to represent the beloved horror author, because it does it so distinctly and differently from almost anyone else...

Sulphur Aeon is at its squamous, withering core a guitar and drum-heavy death metal trio, but the approach they take to the medium is frankly refreshing in the muddy wake of so many chasm-defiling Incantation clones, Swede-a-likes, and so forth. You could consider this old school, fast-paced death with loads of broiling tremolo harmonies and blast beats, threaded with chugging grooves and streaming, fluid picking progressions that hint of melodeath, but pointing out precise influences become more complicated. I sort of thought of it as a hybrid of ominous Morbid Angel growls and grooves with (Devin Townsend's) Ocean Machine in terms of that overwhelming sense of texture to the production which really encapsulates this forsaken, maritime menace. But even this doesn't exactly describe the structure of the guitars, which occasionally reminded me of the thick textures in modern Hypocrisy riffing. Depth charge kick drums, roiling, rich guitar tones and a voluminous, deep bass to the production create a suspense in the listener that he or she is being pressurized on all sides by the brine, Deep Ones pulling at his/her legs as they pull their victim to the ruins on the ocean floor. All the while, waves of ambiance cascade across the background of the riffs like fleeting pods of whales.

Many concept albums of this nature (in extreme metal, at least) have gone for a creepier, abstract vibe, which does play strongly to the atmosphere of the Mythos, but these Germans clout you and squeeze you with a suffocating majesty that works just as well. Think of this more as the 'reckoning' once the Old One has awakened, and not the chain of mysterious psychological events leading up to it. The cultists won, and now a fucking tsunami of tentacles lashes out infectiously through the sheer force of the presentation and balanced, muscular riff set that dominates at least the first half of the record. In fact, the first five full tunes here are utterly perfect. From the melodic swerves of "Incantation" to the black-metal inflected chords of the title track, I was completely floored and flooded by what was happening. It's only a little deeper in the track list, with tunes like "Those Who Dwell in Stellar Void" or "Beneath.Below.Beyond.Above" that it ever starts to feel redundant, that the well of ideas here has dried up ever so slightly. Even then, however, the band is still mightily consistent in sound, and the closing march "Zombi" with its sheen of glimmering wave-like melodies is a nice reprieve from the near 40 minutes of 'the bends' one might suffer from the heavier material's ballistic decompression.

Other than this marginal dive in quality as it progresses, Swallowed by the Ocean's Tide is unquestionable phenomenal. The production might prove too dense and saturated for some who like a lo-fi, stripped sound to their death metal instrumentation, but if you're open to the added weight of studio layering, this proves a wonderful proof of concept that really fits its artwork and theme. The vocals of 'M' Martin Hellion are not exactly novel for the field, a gruff guttural not unlike you'd expect from Nile or Tucker-era Morbid Angel, but I can't think of anything else that would have been able to hold it's own against the glorious oppression of the guitars. Ultimately, this just has everything I desire in a 21st century death metal outing. It draws upon a wealth of both old school and newer inspirations, it really doesn't sound 100% like anything else I've been listening to, and Sulphur Aeon exhibit a seasoned grasp of songwriting aesthetics: concise, heavily loaded with riffs that stick, and never boring. It might front load some of its otherworldly, amphibious thrills, but its truly a work of resonant, heart-stopping ferocity from the fathoms. Highly recommended, and not just to fish people.