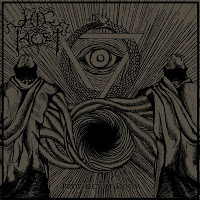 On its surface, Hic Iacet's Prophecy of Doom 7" seems to be tapping the same well of creativity that a lot of the current, cavernous old school death metal devotees are drawing upon, but there is some consolation that the Spaniards incorporate a slightly more black-tinged atmosphere through the use of raw, grooving rhythms and cutting, distant distortion that really lays into the thudding, thumping tone of the bass drums. Also the vocals really are a hybrid between the ominous subterranean growl so commonplace and then a more rasping, venom-tinted edge which maintains a crepitating distance alongside the tinniness of the cymbal crashes. But, for the most part, it's pretty solidly death-driven and in a few moments, where the chords lurch along like somnolent titans, it even takes on a death/doom dimension.

This is very environmental music, so not something to expect much intricacy from in terms of the notes and technicality of the playing. You get pretty simple chords that reek of progressions from late 80s/early 90s death metal like Autopsy or the earlier Death records, and stripped down, moderate tremolo picked sequences that evoke a similar evil. The difference is how this is produced, without the riffs up front, but settled equidistantly against the vocals and drums. I found the higher percussion a little too splashy and noisy in contrast to the lower, rumbling, and all the instruments combined configure into an ungodly mess, but one that has some measure of control through the steady pace of the riffing. The title track, "Prophecy of Doom" is mildly denser and more memorable in terms of how the chords are structured, but stylistically balanced with the first ritual "Elevation of Sun" to provide a cohesive discourse through the Spaniards' nightmares. There are a few periods of droning, spacious dissonance as well which really weight this down into a sodden, chilling mire of aggression that takes its time crawling up your spine.

In total, I quite liked the group's pervasive atmosphere, I only wish the actual guitar riffs were a little more memorable in where they let the imagination wander. Hic Iacet ('here lies') do not dally around too long with individual patterns, they alternate enough chugging force with a barrage of mild acceleration redolent of mid paced black metal, but whenever I deconstruct the notes I just couldn't find them all that interesting. A few more spikes of haunted melodies might have contributed quite a lot to the rhythm guitars, but then again I do believe that purists for filthy, disgusting sounding old school death and black metal like some congregation of Beherit, Autopsy, Muknal, Slugathor and Gorgoroth might actually admire the band's simplistic consistency. Aurally, there are numerous dimensions to Prophecy of Doom in the concentrated disparity of the instrument sounds in the recording, but the riffs really didn't stick to me in alignment with the reverb and echoing, abrasive vocals. Dug the sound a bit more than the structure.