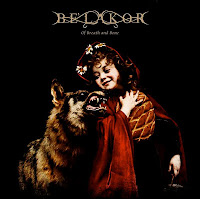 I might draw the line at describing Be'lakor's 2009 sophomore Stone's Reach as an iconic masterpiece for the ages, but there's no question I enjoyed the hell out of that thing, and found it one of the better examples of its class of post-Opeth, progressive-tinted, Scandinavian influenced melodic death metal in the past decade. The Australians more or less continue this theme through their latest, Of Breath and Bone, and once again it's festooned with a dichotomy of surging, triumphant moments and tranquil, almost folkish segues that invoke an adventurous landscape upon the listener. Granted, a lot of folks are pretty spent on this sort of hybrid, but Be'lakor performs it as well as just about anyone, and those seeking a more graceful, grandiloquent alternative to Finns Insomnium or Viking brutes Amon Amarth will find this a shore worth conquering.

It almost stuns me how effortless these gentlemen imbue the surges of chords with constant, meandering melodies, almost as if they were just cutting their wrists and letting it flow out naturally. They generally favor pretty long tracks, around 8-10 minutes, and there's quite a lot of composition in each, to the extent that I'm impressed they can keep all of these melodies in their memories for performance. I'm not normally a staunch proponent for such excess, and Be'lakor might be better served in clipping off some of the appendages, but overall they do a decent job of not boring the listener throughout each excursion. The folksy, classically inspired pieces are well written and provide a welcome counterbalance to the harder passages, though they don't always forge themselves into memorable terrain. The instrumental interlude "To Stir the Sea" is a good example, with flutes, acoustics and synthesizers that are cutesy but hardly hypnotic in structure. No, the Australians are far better when meting out miles of moody melancholy through a duality of chords and ringing melodic architecture which is well on par with their Swedish and Finnish forebears.

Though I enjoy the clean production of the rhythm section, and don't find the pair lacking in terms of their prowess, I do feel like they're constantly being outclassed by the guitar progressions, pianos and other atmospheric glints peppered about the corpulent 56 minute run time. Considering the band's sheer sense of extravagance, it'd be a positive to let these two experiment more, because as it stands I felt like I was too reliant on the guitar's melodies to really rip through my memory, which only happened about half the time I was listening through them. The guttural vocals are quite a contrast to the music, because they lack the sense of intricacy and overpower you with a gruff inflection quite familiar to those who enjoy Johan Hegg, Taneli Jarva (from his later Sentenced recordings) or Niilo Sevänen, and while this is not a huge problem, they're often too similar to other bands to really hold their own for long. The lyrics are quite good though, with a surplus of thoughtful, introspective imagery aligned to the sad emotions of the guitars.

There wasn't a song among these eight without something interesting happening somewhere; but I'd point out "Fraught", with its Amon Amarth-like melodic death/thrashing tensions, and "The Dream and the Waking" with its triumphant, twilight haze of guitar harmonies as particular standouts here. They definitely have a Scandinavian sensibility inherent to their more exotic note sequences, though I would say that they should attempt to branch out a little further, because there is some degree of predictability to how these bloated pieces play out. Of Breath and Bone is a very consistent album, with oodles of riffs through its course, but they tend to remain within a certain safety zone. Added dissonance, wilder percussion, or a more alien architecture threaded through the melodies, would contribute greatly to some of the melodic choices and provoke something far more than a Melbourne mirror to Northern Europe. All told, Of Breath or Bone hung a little lower on my attention span than its predecessor, but it's still worth hearing if you've held out hope for this niche, or if you crave more along the lines of Across the Dark, One for Sorrow, Twilight of the Thunder God, Morningrise or even mid-to-late 90s Katatonia.