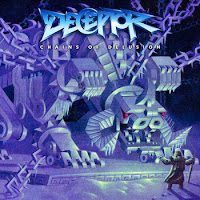 The short version of what makes Deceptor's Chains of Delusion EP so damn compelling: it takes just about everything you know about the genres of traditional thrash, speed and power metal, traces them by the roots to their source in the ground, hacks 'em up into a juicer, and then proceeds to regurgitate them into one of the most delicious blends you've tasted in a good long time. Shaken or stirred. Room temperature or add ice cubes. Morning, noon, night. England's latest (deserved) sensation earns its master's degree in mixology while tearing out some of the best, science fictional metal tracks I've heard in ages, fronted by a wonderfully rabid, schizoid vocalist who exponentially increases the character of an already unhinged slew of memorable riffage.

The longer version: This rules. Track down a copy or I don't like you anymore.

The beauty of Deceptor's sophomore EP is that it throws out all the rules, and then proceeds to play by them anyway. There's an organic, vibrant feel to the production of these tunes that feels so much more laid back and sincere than most of the oversaturated, brickwalled studio sounds I equate with the mesh of genres they play around in, but the hooks and technicality on parade are superb. Reminds me quite a lot of when I first heard Slough Feg (when they were The Lord Weird Slough Feg); this band isn't nearly so folkish in composition, but the love for classical and slightly complex, nuanced riffing is in the ball park. The drums are tactile, the bass just as dextrous and involved as the rhythm and lead guitars. Apart from the two robotic-voiced interludes, which I could give or take, Chains of Delusion consists of four dynamic and distinct pieces, loaded with tasteful licks which betray a love of all things 80s. There's the sort of harried, classically-inflected picking redolent of acts like Megadeth or Helstar, but the band isn't afraid to erupt into a more focused groove. What's more, the guitar tone isn't excessively driven or distorted, so you get this rich, natural, springy sound in the chords that holds up through the more frenetic note progressions.

Even more diverse, though, are the vocals, which run the range from a Bruce Dickinson or Harry Conklin power metal inflection to all manner of wretched thrash barks aka King Fowley (Deceased), salacious psycho screams that reminded me of the super obscure US act Terrahsphere, and even a few guttural growls. Literally, they'll shift gears from measure to measure. There's just no end to what they'll pile into a cut, and yet rather than coming across as disjointed or scatterbrained, they all somehow manage to fit beautifully into the puzzle; yes, even the weird crooning sequences that appear in some of the verses. As a result, Chains of Delusion becomes a consummate piece of entertainment more than a tired adherence to the blueprints which often bring the boring to the band's constituent parent mediums. No, it's not a pure, biting thrash effort like you'd expect from Exodus or Warbringer, written purely for the mosh-inclined, but it plays with a lot of that genre and twists in some NWOBHM styled guitars, classic US power metal, and ultimately, whatever the trio desires. Listening through this was like experiencing dozens of obscure tapes and vinyls I had from 80s band simultaneously...

I guess the only gripe one could have here is that the music is so good I wanted more than just 18-19 minutes of it, so dazzlingly interesting that you feel as if you're being cut short. But that's largely due to the fact that, upon hearing Deceptor, you'll realize they're mad geniuses with countless ideas boxed up in their minds that you simply can't wait to exploit. Hopefully the clock of sanity won't tick too long before we get to do just that with a full-length; in the meantime, they've got a back log of demos and one prior EP to dive into, or I could just listen to Chains of Delusion for the 40th time. Manic, musical excellence that should delight connoisseurs of both antique and contemporary metallurgy.