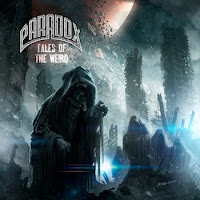 Though some listeners have expressed reservations at the overwhelming, heavily saturated and dystopian brand of power/thrash that Paradox have evolved into, I admit to being fully in thrall with both Electrify and Riot Squad. The future is staring us in the face, after all, and I found both the production and theme of those albums to create a sonic counterpart to my idealized fantasies of such a tomorrow, borne out of the 80s and an early love of cyberpunk and speculative fiction which I have yet to grow out of. Pummeling metallic approximations of Blade Runner, Syndicate, Neuromancer, and Robocop!? Sign me up! Granted, the proximity of their release might have led to some aesthetic overlap in content, but keep in mind that Electrify was already arriving after an 8-year gap. This time around, the Germans have taken a little more time than with Riot Squad to craft a follow-up, and though as a whole I'm enjoying it (only) a fraction less, I will say without question that Tales of the Weird is a more accessibly produced and audibly balanced effort.

Paradox has long excelled at forging atmospheric intros with acoustics that lead the charge, at least since the excellent Heresy (1989), and so does this technique open the 9-minute title track for this sixth album, which is more or less a microcosm of the entire disc. Pugilistic triplets and muscular mutes anchor the material with the same thrashing tension they've adopted since the debut, structurally mirroring classic Californian classics like Master of Puppets or The Legacy more so than countrymen Destruction or Kreator. The vocals of Charly Steinhauer, however, really reign in the European comparisons to various thrash and speed metal outfits like Midas Touch, Deathrow, Scanner, Risk, and of course Vendetta, whose own Daxx was involved with the lyrics on this very album. Charly's inflection is melodic, accented, yet still dangerous enough to deliver the harder riffs here convincingly, and the minor flaws and imperfections, flats and sharps actually enhance the experience, a common trait I've found in German thrash especially (great examples would be Schmier or Mille Petrozza, two far more vicious frontmen). What helps set Paradox apart and beyond the bullet belted,  denim vested, garden variety pizza thrash act, though, is the momentous majesty of the dual harmonies, leads, and melodic spikes that are sure to engorge their appeal to modern power metal addicts.

Tales of the Weird feels ambitious as a whole, even if you break down individual components of the sound and find what are often pretty standard note progressions, or riffs that really don't stand out so much on their own. There is such a seasoned framework to the songwriting that even the most direct and violent thrashers like "Escalation", "Slashdead" and "Brutalized" are festooned with melodies, hooks, and flawlessly executed leads that, if not always so memorable, capitalize upon the classical shredding influences that dominated the 80s in both hard rock and harder metal spheres. These are contributed by one of the newest members in the fold, Christian Münzner, and just to put his level of proficiency into perspective: he also plays in tech death metal wizards Obscura and Spawn of Possession...making the transition to this style with ease. The other new member is drummer Daniel Buld, and his performance is a polished powerhouse worthy of any modern thrash outing, with plenty of double bass and dextrous fills to really fill out the low end. Olly keller reprises his role on the bass, and as with the last two albums he rambles along faithfully to the riffs, but ninjas enough fills and grooves into his lines to give the tunes even more depth.

No song passes without some exciting verse or bridge riff, but in particular I found "Day of Judgement", "The Downward Spiral" and "Escalation" the most sticky in terms of their transitions and compelling notation. The addition of Rainbow's "A Light in the Black" is a wise one; not as hard hitting as the originals which precede it, but nonetheless it survives its transformation thanks to the meat on the guitar and clinical but impressive performance of Steinhauer, who sounds pretty clear. Tales of the Weird is not the sort of album which will find a home with fans of the dirtier death/thrash, crossover or black/thrash sounds who loathe progression and unfettered melody coursing through their faves, but it brings back that forward thinking sense of evolution which dominated the late 80s efforts of bands like Artillery, Coroner, Deathrow, Mekong Delta and Paradox itself, which was sadly interrupted when thrash (and certain other strains of metal) fell by the wayside for groove, grunge, and 90s 'alternative'. For this reason alone I might laud it, but the Germans honor the onus to actually write some damn good tunes in the process, and there's no reason you shouldn't dig this if you're fond of Heresy, Collision Course, Electrify or Riot Squad.

Perhaps the title's a bit of a throw-off, since this is hardly an unusual or experimental offering. But I'm sure it was more of a send-up to cult science fiction media. Otherwise: great music, beautiful Claudio Bergamin cover art, and warlike, relevant lyrics consistent with the aggression of the prior effort. Sure, I expect nothing less from Paradox, and I'm sure others have comparable expectations, but its always comforting to know that Charly Steinhauer and crew have our backs just the same.