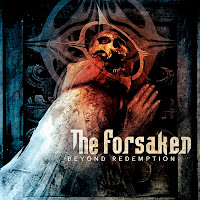 Despite the high visibility of their presence on Century Media Records, and an admirably high level of productivity through 2001-2003 (with three albums in consecutive years), The Forsaken never seemed to break through that ceiling of popularity that would rank them among the A-listers of their chosen niche. To understand their sound is to really travel back to that mid-to-late 90s era when melodic Swedish death metal and modern death/thrash hybrids helped spawn a revival of interest in their medium. Love or hate At the Gates, In Flames, Hypocrisy or Dark Tranquillity, their adopted integration of accessible melodies, grooves and balanced songwriting helped drag 'extreme' metal out of its 90s murk, and they set up a gateway through which part of the genre's audience could return to harsher sounds deeper into the 'oughts.

With efforts like Arts of Desolation, The Forsaken set themselves up for potential success in the field, and I can recall a bit of a buzz surrounding their records, and also picking them up for myself, being readily available at my local brick & mortar audio shop. Unfortunately, what the Swedes' seemed to lack for was truly distinct songwriting capabilities, and the result was a reliable if ultimately forgettable mesh of melodic death metal aesthetics with an undercurrent of harder thrash and death metal. I'd be hard-pressed to recall particular tracks from those earlier works, though I've got no issues with their sound, a bridge between the aesthetics of faster paced Hypocrisy, At the Gates and Holland's God Dethroned. Nine years after their third and final effort for Century Media, Traces of the Past, the group has found resurrection through the Massacre imprint, and produced what is possibly their tightest and most effective effort to date, even if it's not exactly remarkable or compelling enough to break a sweat over. These guys are clearly seasoned for this style, with most of the members involved in the earlier recordings still intact, but there's a certain level of playing it safe here which remains targeted at those fans who pine over that crucial 1995-2003 period.

Production and instrumentation are top notch here, provided you've got no aversion to the level of polish mandatory in most such recordings of this sub-genre. Harried guitar melodies gleam with a Damage Done era Dark Tranquillity tint, while the undertow of aggression rivals that of Hypocrisy's more accessible content like Virus or A Taste of Extreme Divinity. The guitar tone almost entirely dominates here, from the punchy, brawling death/thrash maneuvers that anchor pieces like "There is No God" to the unbridled spikes of dual tremolo melodies.When the Swedes are performing at a slow to mid pace, the chords and mutes definitely take on a balance of groove/thrash aesthetics that might seem a turnoff for some. However, there is some level of atmosphere here, certain hints of progressive metal influence through a handful of the intro and bridge riffing sequences. Perhaps nothing you've not heard in the past, but The Forsaken clearly don't wish to limit themselves 100% to the constraints of the medium, and in this way they remind me of Darkane. Leads are in general quite tastefully chosen and amend that dire necessity for an added dimension to offset the concrete flow of the rhythm section.

Speaking of which, the drummer here, Nicke Grabowski, is definitely one of the most muscular, machine-like hitters I've heard. When he charges his batteries for a blast-beat or dextrous double bass, and fixes his feet and arms to support those pummeling tremolo rhythms, the band lays you out like a stampede of ten ton iron bulls. In terms of technique and fills, the performance is nothing too distinct, but this guy could easily back just about any modern extremity with effortless precision, and his work here really promotes the power and prowess this type of death metal once inspired in metal fans worldwide. Bass is fluid and thick, perhaps not always the most interesting in terms of the lines, but I think the sound of it really matches this sort of dense, panicked, scathing dystopian environment The Forsaken manifests. Vocals are largely in favor of a broad, pummeling guttural inflection, but you'll also get a lot of those Lindberg/Tägtgren rasps that flesh out the sound and help alleviate some of the potential monotony. Overall though, there is just nothing in this specific department of the band that you haven't already heard a million other times.

The lyrics are also a little bland here, with a pervasive pessimism and atheistic nature that, in all fairness, does match the mechanistic aggression of the music; a couple of strong lines and images, though, and certainly I've read far worse. In the end, Beyond Redemption actually proves that The Forsaken are not beyond redemption, and it's probably the most enjoyment I've gotten out of any one of their recordings. If you're weathered and wasted on the whole melodeath scene, and you hate the latest records by bands like Hypocrisy, Zonaria, The Crown, and so forth, then you won't wanna bother with it. But tracks like "Blessed with Wrath" and "No Dawn Awaits" are packed with intense moments, and there is a refreshing excitement through the entire 41 minutes that is sure to win the affections of those who still hold Slaughter of the Soul and its peers in high regard. Hardly an exemplar of memorable songwriting, but well past solid in structure and delivery.