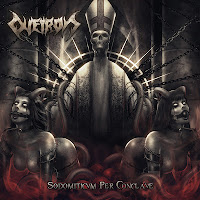 While they've never released an expressly 'bad' album, I've not really been easy on São Paulo's Queiron in the past, strictly because I've just felt that there was a lot of latent ability here which wasn't manifesting into the band's songwriting. The results were a slew of more or less average fast, brutal death metal records which followed closely in the footsteps of their precursors Morbid Angel, Deicide, Krisiun, and maybe the 'death' years of Behemoth. This time out, though, the Brazilians firmly plant a rainforest up my posterior, because the riffs and songs here are very much pronounced, memorable, without abandoning the savagery of its predecessors. From its seductive cover image to the variation of its compositions, Sodomiticvm Per Conclave is a step above its sinister elder siblings and will, in a just world, widen the band's exposure through the underground circuit.

They set this up with an evil, almost martial march of ambiance that transforms into an instrumental called "Ordo Iconoclastic Rebellis", threaded with guitar harmonies. Here you really get the first sense for this more potent, pummeling production. The drums are set just right for the battering ram blasts and fills, though the kick drum does occasionally feel boxy (not a huge problem). The guitars have this robust, crunching richness to the slower, palm muted patterns, and yet they still hold up for the harried assault of chords used to adorn the blasted passages. However, the band has really refined its sense for melody, and the note progressions in tunes like "Perversion in Khaoz" or "Slavghter Ministry" implement a lot of tried and true, classic heavy metal and rock lead techniques into what otherwise prove a less palatable blueprint of brutality. Clinical harmonies are picked through some of the chugging patterns, and the songs on this album distinguish themselves from one another far more than on The Shepherd of Tophet or Impious Domination. Even Marcelo's vocals, which come across like a mixture of classic Sinister and the dual guttural-rasp technique of Deicide, seem more poignant and punishing.

I also really loved the exotic (if overbearing) sense of atmosphere they create through ritual pieces such as the intros or the brief "Templvm Perversvm". Like a lot of death and black metal acts, these guys really use the Latin thing to the point of near-cheesiness. U's become v's, f's become v's. They love that letter: v. But once you blend this all into the extremist undercurrent and the bevy of solid, entertaining riffs that support the album as a whole, it all transforms into something very much fulfilling to the sinister being in each of us. Okay, so Queiron aren't reinventing the wheel, and a myriad of death metal groups like Septic Flesh and Nile have already given us great blends of atmosphere and aggression, but I'll still take this over the garden variety vapidity one finds in the architecture of many also-ran bands and albums. Sodomiticvm Per Conclave is perhaps not a 'great' album, but it kept me interested through almost the entire 50 minutes, and certainly provides a case for one of the more improved acts I've heard this year.