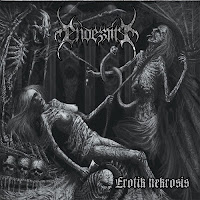 After what I believe to be a looping Doctor Faustus quote, Norse heathens Endezzma dowse the listener in about 60-70 seconds of gradually escalating noise and horror, before letting loose the black metal dogs of war. It's a dramatic entrance, and one that they are fortunately able to capitalize with 40 minutes of consistent material that balances off the primalist riffing of early 90s Scandinavian extremity with a fair share of atmospheric content that prevents the record from ever growing stale. This is an important characteristic in a world where so many bands seem to aim for either one or the other half of this equation, and thus end up in a rather narrow confines from which it becomes difficult to escape. This is not some amazingly unique or inventive outfit, mind you, but they get the job done in the songwriting department, and the rhythmic variation here is appreciated.

Essentially, you've got these dense and compacted grooves ("Against Them All" is a good example) which draw upon the heritage of a Darkthrone, Celtic Frost/Hellhammer, or perhaps even a touch of the latest Satyricon black & roll; and sauteed in higher, jangling strings that often bear the brunt of dissonance. Some tracks go out for an even more anguished, atmospheric structure ("Swansong of a Giant", "Hollow") through which the guitars are used more as a malevolent backdrop for the tortured vocal. Elsewhere they lay on the thicker, double bass drums up to a faster pace, but this is not a band who ceaselessly blast across material: they want you to feel every note, every dripping, malignant emotion dispersed through the instruments and vocals, and as a result Erotik Nekrosis has all the airs of a seasoned, maturated recording. The bass is a copious brute, pumping along against the rhythm guitar, and the drums have a lot of crashing rock techniques that help support the grooves. Endezzma doesn't shy away from using cleaner (though still distorted) strings where they're applicable, and the vocalist puts a lot more character and meat into his inflection than the typical, forgettable rasp many black metal bands drone along with.

The late and prolific Trondr Nefas (also of Angst Skvadron, Beastcraft and Urgehal) shines on what is possibly his final recording, and that richness and cautious rendering of the rhythm guitar paired up with M. Sorgar's (aka Morten Shax) bloodied grunts and howls kept me transfixed upon the music throughout. Individually, I wouldn't claim that most of the note progressions are oh so memorable, and the songs aren't so infectious that I wished to immediately cycle back through them, but on the whole this is a album that really gets it right: it's immersive and interesting, and even the lengthier tracks don't tend to force any sense of boredom during the experience. The bold, up front production readily translates the band's oblique, ominous themes through the speakers without ever threatening the sterilization that often comes with overt polish and overdubbing. Erotik Nekrosis is nothing amazing by virtue of having heard its components many times before through Norse and Swedish black metal pioneers, but darkly pleasurable, well above average.