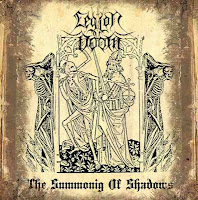 The hurdles faced by Athens' Legion of Doom are not those of musical competence or authenticity, but those of redundancy and the dearth of ingenuity which plagues a lot of those mid-tier European black metal outfits, even those with a 20+ year history. These Greeks have a solid backlog of records like For Those of the Blood and The Horned Made Flesh, and have never truly disappointed, yet they're still complacent in arm wrestling against the law of averages. Certainly, they've powered through most of their matches to emerge victorious, but not without a struggle. One that persists through this latest offering The Summoning of Shadows out through Zyklon-B productions. For all intensive purposes, this is a solid, proficient black metal album with a mild atmospheric flair, but that's unfortunately where it begins and ends.

To put it bluntly: a band which has been around as long as this one has no choice but to provoke higher expectations from the black metal audience, expectations which are simply not met with this fifth full-length. The strange torment of the vocals, and the atmospheric embellishments are about the only things keeping this from an utter state of banality due to the bland riffing sequences. Legion of Doom, once kicking their death and grind roots to the curb and transforming into the black metal entity most would recognize, have never shared that sense for novelty as their peers like Varathron or Rotting Christ. Apart from the infusion of classical and orchestral elements that have occasionally appeared through their records, this is more of an 'assembly-line' style of black metal with its roots in groups like Mayhem, Emperor, Marduk, Enthroned, and the like. Tremolo picked notes and rapid ridges of chords and dissonance that never really deviate from predictable outcomes. Double bass and blast beats which feel more obligatory than passionate. Symphonic intro and outro which in this case are sadly thwarted by the muddled, masculine goofiness of their narration. The bass never feels important whatsoever.

This would all be fine if the tunes at the core of The Summoning of Shadows were any good, but I found it incredibly difficult to generate any interest with the vapid progressions in "An Infra Calling" or "The Garden of Flesh", which are little more than retreads of Northern forebears. Don't get me wrong: Legion of Doom play in key, they play in syncopation, and they can muscle their way through material as if the dynamics on offer were second nature. Fits of cold hostility are balanced with more soothing segues (like the cleaner melodic guitars in "The Garden of Flesh"), but when one steps back a few paces and absorbs the work as a whole, it feels all too comfortably structured. Those with a massive amount of nostalgia for the Norse and Swedish studio efforts of the later 90s might appreciate this sense of familiarity which clearly left and imprint on these Greeks' creative process, but even in that particular niche there is no feeling that this music excels or pays lavish tribute to its inspirations. Coupled with the cheesy bookends, and the lack of much content, this is easily the least impressive Legion of Doom record I've heard yet.