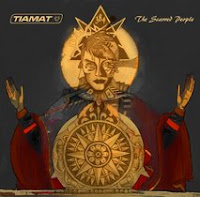 Johan Edlund and Tiamat have always startled me with their ability to hurdle their musical shortcomings and produce unexpectedly delightful records, and The Scarred People is one such diamond in the rough. For all intensive purposes, the Swedes are flawed characters who make the very most of what most would consider a limited skill-set, and constantly reinvent and reinvigorate themselves through strong songwriting, crafty and somberly beautiful lyrics rather than sheer technical prowess or further progression through complexity. Though I'm certain a portion of their fans abandoned them past Wildhoney, the point at which they really started to tinker their death/doom roots into a more psychedelic, atmospheric contraption, they've put out some damn fine albums since, including the brilliant and trippy 1997 opus A Deeper Kind of Slumber which I still consider their magnum opus, or the amusing Skeleton Skeletron with its sultry, blunt vocal quips and rather dramatic spin on Gothic rock, a more muscular Sisters of Mercy.

The three albums since that time have all had their moments, but I actually didn't develop the same level of personal connection beyond a handful of songs. Through The Scarred People, I've really found myself returning to that same sense of immersion I once felt from their 1992-1999 material, and as a result I'm loving the hell out of nearly every moment on this disc. To best describe it would be to take a tour of the band's past 20 years of recordings. You've got a few of the sodden, simply doom riffs circa Wildhoney sauteed in the psychedelic escapism of A Deeper Kind of Slumber, synthesized symphonics redolent of Clouds and the driving Gothic metal of Skeleton Skeletal, and that opaque, cynical sense of humor which was abundant on more recent efforts like Judas Christ. The album also presents an aesthetic merger with Edlund's Lucyfire side project, not only by incorporating one of the tunes meant for that act ("Thunder & Lightning"), but through the pervasive 'Gothic cowboy' sentiment that courses through the pacing and structure of the music here. Guns at dusk, not dawn. As an individual who has always appreciated the anthems of the black mascara sect nearly as much as his fascination with harsher metallic climes, I'm admittedly part of that choir Edlund is preaching to...

Yet I feel that The Scarred People has something for everyone. It's grand, emotive, powerful and in truth accessible enough for your girlfriend or the non-metal crew you run with (if applicable); and we'll try not to hold that against it! Edlund's baritone prescription brings to bear the very best ingredients of a Nick Cave, Andrew Eldritch, Peter Steele or Fernando Ribeiro with astonishing humility, and his lyrics remain poignant and perceptive despite the stark simplicity of their architecture. Think of it as clever cafe-pop poesy through which a deeper layer of shadows grasp out at the acute reader, but the subject matter isn't rocket science: love, hate, drugs, and mythic deconstructions rendered into a shot of verbal vodka. Wherever necessary, Edlund's verses are complemented with a deeper, cavernous chorus ("The Scarred People"), or a higher pitched harmonic backup ("Winter Dawn"), or even some samples in the brief snippets of "Before Another Wilbury Dies". The voice is perfectly grafted to the deceptive minimalism of the music, and unlike a lot of albums I get regularly for review (or purchase), it's fascinating to explore the lyrics alongside the riffs.

And of those riffs, there are very few misspent through the 50 minutes of disc. Nothing intensely original or complicated, but as I mentioned before, Tiamat simply don't need arpeggio noodling or rhythmic acrobatics to convey an effective mood. These are brazen, loud and highly atmospheric note choices which produce a potent, memorable girth. Whether it's the doomy "384 - Kteis" in which the downward, drudging chords are embellished with hellish funeral organs, pianos and random distortia; or the mammoth rocking grooves of "Winter Dawn" which wouldn't feel out of place on a Stone Temple Pilots, Pearl Jam or Soundgarden record, Edlund and recent acquisition Roger Öjersson never give us anything more than what we need, and boldly, whether in an open chord pattern or a groove. But here again, The Scarred People is not without a few surprises. The wailing rock excess of the "Before Another Wilbury Dies" interlude isn't something I've heard before in the Swedes' canon. The intro sequence in "Love Terrorists" rekindles their Pink Floyd influence, and the cutesy and fragile melodic picking threaded through the verses of "Messinian Letter" would be a radio worthy hit in the hands of, say, Eric Clapton.

Perhaps the only guitar moment I wasn't taken in with is the "Tiznit" instrumental, a fusion of clear acoustic guitar and trilling bird songs, but it's nonetheless smooth as a river calm. Now, Tiamat's rock oriented music doesn't exactly lend itself to a lot of divergent experimentation through the rhythm section. With that said, I must laud Anders Iwers' bottom end strumming and Lars Skjöld's beats are about as fulfilling as the riffs will allow. The electronics coursing through the tunes are all very subtle and well spaced, usually to provide some added texture to a verse, and never overwhelming. There are moments of pure orchestrated bliss like the intro to "The Scarred People" which inaugurates the album, but they're succinct enough to flood the listener with their majesty and kindly cede to the guitars. In fact, they often grant the music a very 'upbeat' feel for Goth metal, and there are a number of tunes here like "Thunder & Lightning" or the title cut which seem like natural successors to the Sisters of Mercy's popular "Temple of Love" anthem. In other places, like "The Red of the Morning Sun" or "Radiant Star", Tiamat was channeling the slower material of  neighbors and countrymen Lake of Tears with these broad, doomy vistas of cold, dry twilight desert.

This is just one of those immediately timeless experiences which I find myself repeatedly returning to since picking it up a few months back, and it goes without saying that it will not disappoint those who have been digging on the band these last few decades sans interruption. I wouldn't qualify this as a full on Gothic metal effort, because in truth it's probably only around 40-50% metallic and the rest is heavy psychedelic rock, but this distinction is irrelevant to the overall quality, and the ratio of escape and enjoyment to moments of music breaks pretty even. It's one of the best albums I've heard all year, but not the sort which will bewilder you with dizzying fits of proficiency or originality. Warm in cold in equal rotation, sad and triumphant, addictive enough that I wish it had come with a Surgeon General's warning. I'd love to smoke this album on the corner while donning dark shades and leather, dreaming of caffeine, pale flesh and fishnet stockings.

"Fellow students. Over the past week there's been a lot of confusion, and so we've asked for this assembly to clarify the difference between goth kids and vampire kids. Let us make it abundantly clear: if you hate life, truly hate the sun and need to smoke and drink coffee, you are goth. If, however, you like dressing in black 'cause it's fun, enjoy putting sparkles on your cheeks and following the occult while avoiding things that are bad for your health, then you're most likely a d*uchebag vampire-wannabe-b*ner. Because anybody who thinks they are actually a vampire is freaking retarded." South Park (Season 12, Episode 14), 'The Ungroundable'