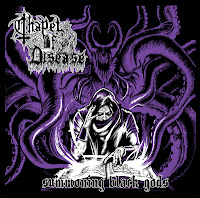 Some part of me has to wonder: why all of this old school death metal lately? Do we fear the Mayan apocalypse so much that we must open a temporal gateway into those precious 1988-1993 moments and relive what for many of us must be the prime of our lives? Why not disco? Or West Coast gangsta rap? Okay, I might have gone a little too far. It's no surprise that Germans Chapel of Disease are yet another in a very long procession of acts to indulge their childhoods, and they do it with a very European flair, by which I mean they heavily channel the archaic sounds of Pestilence (and early Van Drunen-era Asphyx), Grave and Bolt Thrower into their compositions. Sure, you've also got a heavy dose of American elders Death, Possessed, Xecutioner/Obituary, Cianide and Autopsy which comes with the territory, but Summoning Black Gods more directly reminded me of an infernal conflagration between The Rack, Consuming Impulse, War Master and Into the Grave. And if that comparison just stirred up some excitement in your nether regions, well then...have at it.

Most of the techniques here are nothing special or inventive by any stretch of the imagination, but what the Germans do is inject a bit of vitality thanks to the rather raw production. This really feels like you've been zipped back to 1991 and saw that creepy looking metal tape in the window at the brick & mortar record shop and then counted your paper route profits in eager anticipation, only to be disappointed that that one other hardcore metal dude with the beat up Corvette and the mullet (who graduated a few years before you) already cleaned out the shop, with about ten others you might have wanted to purchase. The guitars are crunchy and clear but there is no attempt to overproduce anything. Summoning Black Gods is definitely attempting to evoke that narrow margin between thrash and death metal, so you've got some solid mid-paced violent antiquity in amongst the tremolo picked rhythms and slower, Bolt Thrower-styled, lamentation grooves and melodies. The riffs in the depths of "Descend to the Tomb" and "Hymns to the New Land" provide a living, breathing, wayback machine, and even when the band flirts with some death & roll rhythm ("Evocation of the Father"), etc, they do it with pretty good taste. In addition, the leads implemented on this debut are evil, airy and burst onto the scene like a luminous haunt flitting about a dark graveyard, not unlike old Entombed.

Paired with the ghastly Van Drunen impression that the vocalist here revels in, you've got yourself a genuine if derivative fright fest. His inflection is sort of a hybrid of what you'd remember from The Rack or Consuming Impulse, only with a little more echoing sustain that shadows the momentum of the churning guitars. The drums and bass have a loose but muscular feel to them, not all that interesting unto themselves but fully aligned with the retro feeling the album so desperately maintains. In terms of songwriting or individual riffs, there are not a lot here that reek of immortality, since they're just paying service to a long tradition of like sounding chords and notes, but there's no question Chapel of Disease love what they're doing, and the passion really turns what otherwise might feel like another spoke in the wheel of nostalgia to a full on haunted hot rod fuming spectral vapors and hemorrhaging hellfire in its wake. Summoning Black Gods is no marvel of greatness, but it knows and obeys its audience, so if you're the sort to keep his Autopsy and Asphyx vinyl dusted off and displayed, or you dig the recent efforts by groups like Horrendous, Skeletal Remains, Nocturnal Torment or Hail of Bullets, then I think you'll find that this belongs in your neck of the woods, like that old, foggy sepulcher that the local villagers feel strangely compelled to avoid...