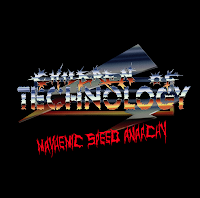 Though never the most reticent of metal bands, Italy's Children of Technology really wear their hearts on their sleeves so boldly that the bloodstains will never come off in the wash, no matter what super strength detergent used in the purge. A colored chrome logo proudly transforms the group's logo into something belonging to the past, giving impressions of Razor or other such 80s blitzers, and the 7" EP's title of Mayhemic Speed Anarchy provides a blunt summary for those not yet in the know about their retro pandering style. This is a band courting a hybrid of punk, speed and thrash metal aesthetics which has generated a healthy chainsaw buzz through the underground in the past few years, and the tracks here are in no rush to break the mold whatsoever, which is business as usual, and what many are no doubt looking for in their sound.

"Mayhemic Speed Anarchy" is thus pretty standard fare for the Italians, a wall of forceful, brazen punk chords pumped up to early 80s metallic acceleration and woven through with crazy fits of lead work and corrosive gutter bark vocals redolent of the crossover splatter titans of the past, complete with screams that recall old Razor or Slayer in their petulant sense of infectiousness. The drums and bass are simplified and streamlined to accompany the narrow selection of riffing, but I enjoyed the pumping low end tone and the rather thrown-together, authentic feel of the beats nonetheless. Problem is there just isn't all that much here, and the main guitar progressions feel as if they've just been paraphrased from numerous crossover/punk influences and barely spiced up beyond the leads. This is energetic, propulsive stuff fit for a circle pit, but it never really goes beyond that, and I found it inferior to a number of tracks from It's Time to Face the Doomsday, their first proper full-length from 2010 which was pretty good. I definitely derived an aesthetic appeasement from the tune, but it's not catchy enough for many replays.

The B-side is better, but that comes with a caveat that it's a cover of Swedish punks' "Computer World" (from their 1989 album Faces of Death). The riffs are again pretty straight punk rock, but there's a bit of natural dissonance to the chords which gives it an almost archaic Teutonic aggression. I also really dug that unhinged wildness of DeathLörd Astwülf's pavement scraping growls and grunts here, and the band's frivolous solo work complements the momentum of the original rhythm guitars. Of course, I was already a fan of this original tune, so I'm probably a bit biased in its favor, but Children of Technology manage to have some fun with this and make it their own due to the vocal variation. All told, Mayhemic Speed Anarchy isn't a bad little 7" if you're in the mood for a collectable, or if you enjoy C.O.T. for their past works, but with just around 7 minutes of content, it wouldn't be a great starting place for newcomers, who could make a b-line for It's Time to Face the Doomsday or the Chaosmutant Hordes EP.