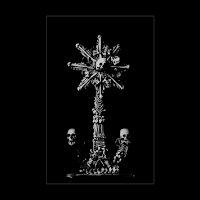 While this isn't my first encounter with the black works of Finnish multi instrumentalist Kryth, it's my first with his Pure Evil project, a band in which he performs all instruments and vocals. I covered the full-length 2009 debut of Korgonthurus, Marras, upon which he handled the drums and guitars, but that was more of a collaboration and focused on more gratuitously swollen compositions. This, the 3rd Pure Evil album,  As Blood Turns Black, Mankind Shall Drown in Despair, also features some weighty track lengths, but we're talking in the range of 9-11 minutes, and they're broken up by shorter pieces to provide more of a variety to the experience; a crucial distraction, because a lot of the music here is molded from somewhat stock riffing aesthetics of the post Beherit, Darkthrone variety that we've been inundated with countless times.

Let's not take lightly this guy's talents: he drums, he writes and records the bass and guitars, and he then slathers the experience in a hoarse admixture of rasped and growled vocals. The flow of the music here is very often a mid to slow-paced stream of dense, melodic chords which reminded me often of other local heavyweights like Horna, Behexen or the more anthemic tracks of Satanic Warmaster; though Pure Evil carries a more serious, somber attitude within its notation. Occasionally, as in the opening riffs of "Blood Turns Black", Kryth bursts into this barrel-rolling, primal intensity circa Hellhammer or Darkthrone, and then he clobbers you with a mid-blast beat before transitioning into slower, atmospheric moments (this was also my favorite tune of this batch). I also can hear the clear death metal influences here, because his vox will often favor a sheer guttural inflection, and some of the tremolo riffs in places like "Seas of Blood" definitely have more of a pure old school death strain. Some credit must also be given that Kryth doesn't endlessly just recycle the same riffs, there are plenty enough transitions that the longer cuts don't stumble over themselves.

What I found less interesting was just the construction of the riffs, which are merely pretty average in the wake of so many other like-minded acts. This is no frills, traditional blackened metal which doesn't rely on ambiance or synthesizers to provide much atmosphere, but a lot of the licks were ultimately predictable in how they manifest, and despite the project's handle of 'pure evil', I ended up thinking the brighter rushes of melodic progressions were more mournful than sinister. That said, the production here is effectively noisy, thick and punishing. You can make out all instruments including the flooded bass lines, with the vocals strident and tortured atop the fuming, cold-blasts of guitar. Fans of Scandinavian classics like De Mysteriis dom Sathanas and Transilvanian Hunger might find something to like about the disc, not to mention the Finnish acts Sargeist, Horna, Behexen, Vitsaus, and Kryth's other projects. There's certainly a sense of purism here I can appreciate, but in the end this one didn't leave much of an impact crater on my soul.