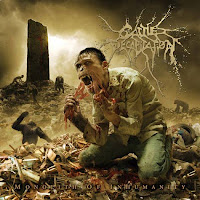 San Diego's Cattle Decapitation is not a group I've ever been able to build much of a connection with in the past. This isn't simply because of my fundamental contradistinction to the dietary politics and anti-human ranting which informs most of their lyrical themes. Hell, if concurrence with the philosophies, religion, or ethical practices of musical creators was some mandatory qualification for my patronage, there would be painfully little music in my collection. No, most of their albums have always thrown up a purely musical barrier for me, since they originate from a tradition of grind and post-metalcore extremity which rarely seems to hinge on distinct, memorable songwriting or the multitude of noteworthy riffs I generally seek out in any metal niche. Oh, they've got them: a million fluttering, crashing and whizzing around each set of songs they've spawned, but most seem to blast past me with little fanfare, dangling off my earlobes for a few seconds and then plummeting into the food disposal like so much meat, bone, and gristle.

That said, it would be an injustice to ignore the band's enormous leaps forward in production, songwriting and musical ability over the last decade, since they've intensely refined and defined their skill set to the point at which they'll give just about any progressive or technical brutal death outfit a run for its money. That point is Monolith of Inhumanity, hands down the band's most impressive musical manifestation to date, and one that dwells upon the edge of the envelope in terms of its mechanical, meticulous attention to detail. Where this album succeeds is in its sheer, flesh-shearing variety. Callous, inhuman fits of celerity and aggression are surged against shores of slower, grooving bombardment, wherein all manner of modernized death/thrash outbreaks are stored to infect the listener before returning to the full-scale forward charge. The production here is as polished as you'll find anywhere in the current proliferation of brutal death/grind, but rather than gimp the extremity, it only serves to enhance it further. There are blast beats and double bass patterns on this record executed so precisely that your ears will bleed, but at the same time you can make out each of the inestimable guitar progressions, which range from lightning mute-streams to denser, shining, dissonant chords that function off influences as wide as black metal and jazz.

In all honesty, I wouldn't be surprised if David McGraw were given some sort of 'drummer of the year' award for his performance here. It's nothing unique, perhaps, but that's the worst you could say of it, because the man is essentially a new model of the human metronome, his technique so fast and flawless that he's liable to discourage (or further inspire) a younger generation of skin bashers. Even through the album's most eloquent, atmospheric moments (the bridge of "Lifestalker" or "Kingdom of Tyrants", for example) he keeps the battery so harried and head-spinning that you really have to wonder if he's really just using the music of Cattle Decapitation as a front for his nefarious scheme to track down and murder a young incarnation of John Connor. The other hero of this outing is long-term stringer Josh Elmore who offers us a dexterous and dynamic sortie of licks that cover a pretty broad spectrum of death metal, grind, black metal, metalcore, groove and thrash chops. To be perfectly honest, only about half of these riffs are really any good, and the rest a pretty bland canvas of predictable and prepackaged formations you could find on many similar albums (or paraphrased from his own earlier tunes), but I definitely won't argue that he's come a long way in keeping a listener engaged for more than a choice few moments.

Elsewhere, the album wasn't so attractive to me. The vocals are a garden variety configuration of rasps, grunts and deeper gutturals you've heard countless times before, occasionally apprenticed by some earnest, grimy, dystopian cleaner tones that recall a band like Gojira or Darkane. Despite Elmore's quality as a player, the leads lack impact. The bass player is obviously great, but he's only given a few measures through the album in which he can really shine. His tone and technicality are spot on, yet he is simply buried by the exhilaration and momentum of the drumming and guitars. As I mentioned before, there are quite a number of patterns and riffs here which simply don't stand up across multiple exposures. I'd call out a lot of the accelerated bursts, honestly. I often felt like this album functioned more on a statistical sense of strength and finesse than emotional resonance. Not to the point where you feel its content is as robotic and disaffected as something like Brain Drill, but certainly it is borne on that same assumption that its audience is more interested in being impressed by the instrumentation than any enduring songwriting, which is why when the band lurches into a moody, atmospheric, apocalyptic piece like "The Monolith", it stands out so much from the remainder by virtue of its aesthetic differences.

In the end, while I was interested enough to go out and actually buy the album based on clips of what I'd heard and the recommendations (and requests) of a number of folks, I did not wind up thinking it the salvation of death and grind that several seem to espouse. Structurally, it's a technical marvel that one might appreciate like a work of impossible industrial artwork in some metropolitan courtyard, but beyond that my own reaction to the Cattle's music was lukewarm. Blindingly well-executed, and certainly a league past earlier albums like Humanure or Karma. Bloody. Karma. Loaded to overflow with lyrics of civilization's collapse due to its carnivorous consumer-culture. However, it almost unanimously lacks any facet of menace or evil in its construction that I so desire when listening to death metal of any stripes, old school or new, musically or lyrically. I just don't feel any more doomed or desperate here than I do listening to an Al Gore sermon. A taut, vice-like, acrobatic escalation from the band's backlog, but unlikely to compel many more spins from me in the coming months.