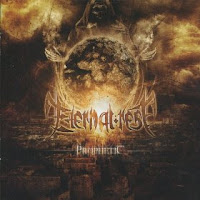 I first encountered Eternal Rest about 3-4 years ago with their Seize of Anubis EP, a decent offering for such a young band who had a similar fascination for Egyptology to the mighty Nile, which only marginally rubbed off into the music itself. I guess one could consider them a more 'accessible' alternative to the South Carolina brutes, a comparison that holds true through their proper full-length debut Prophetic, which was picked up by a local Massachusetts imprint (Deepsend Records). Not to say that this is highly derivative of, say, Amongst the Catacombs of Nephren-Ka, because Eternal Rest in truth draw on a number of influences in the genre (Behemoth and Immolation, for example), but clearly there are some parallels in sound, especially when the blast beats begin and the riffing escalates into its busiest phrases.

There are a few acoustic passages, including one that sets up the record, and even here they integrate some of that ancient Middle Eastern/North African flavor in note selections, but they definitely shine most when they're infiltrating the architecture of aggression here, and function seamlessly against a lot of the low end palm muted grooves. In fact, very often a section here will consist of some glorious, sliding melody phrase being set against a pretty baseline chug fest (like the intro to "Infernal Reign"), but I can't say that the rhythm guitars are very interesting here by themselves, and it wouldn't have hurt to integrate a bit more complexity without losing the importance of the melodies. Far better when both of the guitars are pummeling along with a progression that would do Melechesh proud, only in a purely death metal context. Granted, there are not a lot of such moments through the record that really stand out, but overall the tempos are varied enough, and the leads meticulous and well crafted enough; mummy-powered arpeggios that whip about the desert sands. I never felt myself drifting out of focus, even if it's not the most amazing material.

It also helps that the whole album is only about 32 minutes in length, so the Australians don't really fuck around. Get in, get out, and hope you don't draw some fell pharaoh's dynastic curse upon yourself. The drums here are more than adequate, with a lot of spurious blasting that brought me back once more to memories of Nile (just not quite as crazy). Vocals are a deep, munching guttural offset by salacious rasps which feel like Horus and Anubis sharing a drinking song, but I actually found the latter mildly annoying since the frontman's growls are quite fulfilling, quaking and cracking any obelisks in their path. The bass guitars also does little interesting throughout much of the material. At a few points, it pumps along maniacally, as in the verse of "Remnants", but too often subsists on the rhythm guitar. Beyond that, Eternal Rest doesn't do anything overly atmospheric like drench the tunes in synthesizers, but I enjoyed the subtle little spikes of eerie, atonal backing melody that they would occasionally fire up against the rhythm section in songs like "Preaching the Decimation of Spheres". It adds texture to what is admittedly not always the most ear catching array of riffs.

Does this entirely improve over the Seize of Anubis? Not exactly, but its got enough aspirational fire behind it that fans of death metal which doesn't err too far on the brutal side might dig it. Morbid Angel, earlier Nile, and numerous Polish bands flashed through my mind as I was listening, and I think the Australians have yet to really venture into their own terrain, but Prophetic doesn't cling so closely to its precursors that it feels redundant. Busy and competent, just not ever all that exhilarating. Better rhythm riffs to support some of those breakaway melodies would be appreciated, rather than the monotonous palm mute progressions which often pop up, but Eternal Rest is otherwise satisfying enough that I wouldn't feed it to the crocodiles.