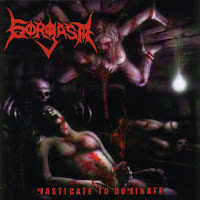 The few times I've rolled through Indiana, likely en route to some Midwestern metal festival, it always seemed like a pretty peaceful place. Golden fields all around, nice people, tranquil roads... Masturbating corpses, torture cellars/cabins, and bloody, bursting wombs never crossed my path, but I bet it was all just a 'show' those folk were puttin' on. For, lurking in the rank corners and back roads of the Hoosier State was Gorgasm, a quartet of merciless murder mavens who were at that very moment thinking up perverse means to mine own end, in the form of Masticate to Dominate, their second and best full length effort wrought upon Unique Leader Records, and judging by the sound of the thing, I'm not sure it could have found a more suitable home...

The formula here was not an immense deviation from Bleeding Profusely, but perhaps why I hold this in higher regard is that it really finds the perfect balanced between the genre's penchant for brutality and the more musical, melodic tendencies Gorgasm wasn't shying away from on their older releases. That's not to say they evoke any 'warm' or 'tingly' feelings through their selected note progressions, unless depravity and necrophilia are your thing, but clearly these guys were never just content with plugging away uselessly on the same forgettable chug to blast patterns beaten to death by scores of undergrounders. That said, I did feel that Masticate to Dominate was a slightly more 'typical' sounding brutal death effort than its predecessor, little more than a smorgasboard of ideas previously manifest through Suffocation, Morbid Angel, Deicide, Deeds of Flesh, Malevolent Creation, Cryptopsy and the first few Cannibal Corpse efforts helmed by Corpsegrinder (Vile, Gallery of Suicide, Bloodthirst). Fortunately, that doesn't hinder the material from slurping your entrails out through a gaping puncture wound and then stomping on them while you watch.

A few carefully timed splatter/smut samples. Loads of start/stop tempos used to set up blasted patterns with their staccato streams of surgical muted rhythm guitars. Thicker, chugging breakdowns which hurt so bad you can feel them on your own palm. Guttural verbal secretions with a syllabic punctuation somewhere in between George Fisher and Lord Worm, with a slight tendency to return to those toilet bowl intonations the guys used on the older material. Muddied, acrobatic spikes of classical-guitar influenced scaling patterns pop up in places like the bridge of the title track, also paid forward from the earlier works. Gorgasm acquired not only another drummer here (their third in three records) in Terrence Manauis, but also a new bassist in Paul Garcia, so basically an entirely new rhythm section. But they pull it off, keeping the beats organic and rampant, the bass lines audible and instinctual against the rapid churning and spitting of the rhythm guitar.

It's neither rocket science nor the most complex material of its field, but the run and gun riff progressions and incessant hostility were a sadistic satisfaction guaranteed for the record's intended audience. Novelty and nuance are rarely felt through the composition, and it lacks some of the incendiary lead work that provided a number of the highlighted moments on Bleeding Profusely, but all in all the balance of riffing and tempo variation here is superior. Not to mention that they draw out the tracks to a more palatable duration of over 3 minutes, so the listener is given more time to actually 'get into' the contrast of blasts and grooves. I even felt a bit of giddy, gruesome, mortuary slab fun here in "Concubine of Despise" that reminded me fondly of the post-Carcass West Coasters like Impaled and Exhumed, though the vocals definitely remain loyally in the gurgling category without the growl/imp interchange you'd expect.

Admittedly, I wasn't immensely fond of the production here. The rhythm guitars are punchy, but both they and the melodic sequences feel a bit dry, especially in unison. Some added reverb, chorus, or other effects would have given Masticate to Dominate a more engrossing atmosphere, but at least it feels functional, and you can make out all the grunts and bass notes if you listen closely enough. The lyrics are grotesque, sexual perversions upon both the living and dead, zero political correctness, 'peaking' with the closer "Deadfuck" which is as accurate a summation of the entire experience as you'll get here. Jon Zig's arwork was easily identifiable and the best Gorgasm has yet used, but not something you'd want to show off to your Sorority sisters and their mothers at the next sponsorship gala. Masticate isn't perfect, and I've long crossed my fingers for the leads, atmosphere and maybe even an occasional synth line (as on the debut EP) would take a more prevalent role to balance out the brutality, but this was definitely an entertaining onslaught that they could be proud of. And MAYBE their moms and pops...but I doubt it.