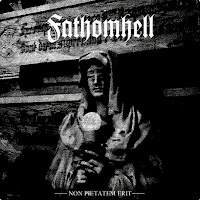 Fathomhell is a new Spanish band which expresses a clear admiration for the more melodic Scandinavian black metal bands of the later 90s. Specifically, some names that floated around my gray matter as I was listening through this EP were Dissection, early Sacramentum, Lord Belial, and perhaps some De Mysteriis dom Sathanas, or Darkside era Necrophobic for good measure, though they are by no means just limited to the above in terms of their technique. The plus and downside to this is that, while they've got an excellent sense for composing the mandatory melodic lamentations in the guitars, and supporting these with strong sequences of despotic, churning chords; there were also a few production hangups which seemed to, at times, betray the songwriting.

I'm not usually too put off by a drum machine, since it's often mixed or programmed well enough that it can subside just below the atmosphere of the riffing, or even add an element of coldness. Here, though, I found that it could get in the way. The beats are tight, but the overall presence feels a bit too flat and machine-like for the more emotional rhythm guitar progressions. The bass lines, here, also seem to just blandly trod along below those rhythm guitars; audibly pumped, but even in a space like the slower bridge of "Fall to the Infinite Depths of Abyss", where they could have shined with a groovier notation, they just drift along predictably and it feels like they rob the material of a potential depth and dimension. The vocals, grafted with a salacious, rasp, are somewhat uneven in quality through the various tracks. For instance, in "Devours the Light, Eats Their Souls" they feel more garbled with a more guttural bark to them, not so great; but in "Fall to the Infinite Depths of Abyss" they alternate between a straight, wretched drawl and a more shrieked, Varg Virkernes style torment and they seem to cling better to the leeching emotions of the riffs; in fact they were one of the best parts of that song...

When it comes to the guitars, though, Fathomhell is far more consistent. There are a few progressions here or there where they stride into a predictable, effortless repetition, but in general they've got that corpulent depth of character that you might have once felt from an album like Storm of the Light's Bane. Glistening with both warmth and pain, light and darkness, they're the strength the of the Spaniards, and even where they'll cut off and leave the guitars alone, like the evil harmony that sets up "Illusions of Death", I was totally transported back to the 90s and what I enjoyed about that atmosphere of In the Nightside Eclipse, Born of the Flickering, The Somberlain, etc. Not to say that the notes are as catchy as their spiritual forebears, or truly memorable long after the 25 minute EP ends, but certainly the minds behind these chords and tremolo picked patterns are well versed on the particular style, and herein lies the potential. The intro and outro, heavily dowsed in synthesizers, area also quite nice bookends to the release, and after "Dante's Inferno" and the intro to "Devours the Light", I was pretty excited.

All in all, for an independently released intro offering, Non Pietatem Erit is decent, if nothing exemplary or out of the ordinary. There are no limitations here that couldn't be overcome with an actual drummer or just better dynamics in the mixing; and while they're not always on fire, the vocals do have their moments, as do the riff progressions. If you're seeking out a younger band that captures that Swedish spirit accurately, you could do much worse than this.