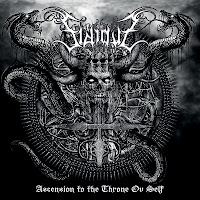 Much will be made of this English band's sheer technical acuity and intensity, but what I found most interesting about Sidious is just how seamlessly they've created an intersection between Polish death metal and symphonic Scandinavian black metal. Ascension to the Throne ov Self is as if someone mixed the two scenes into their respective Petri dishes and then inseminated them into an embryo, where they matured into a precise, mathematically balanced being. That's not to say that fusion of these two mighty styles creates the most memorable music, at least not here, but this isn't something you hear attempted on a daily basis, and Sidious gets an 'A' for effort in that respect, with four loaded tracks that test the limits of human endurance.

Incredible blasting that spun my skull straight off my spine anchors a dense, like pressing 'fast forward' on a modern Behemoth track. Varied, athletic rhythm guitar picking cycles reminiscent of Decapitated on their first (and best) record Winds of Creation. Sweeps and tremolo picking are not uncommon, but they'll also break into dissonant black metal-based chords and some gleaming, simpler lead melodies that generate more of a dynamic atmosphere over the harried undercurrent of drumming. Vocals eschew the pure guttural gurgle of brutal/tech death to instead create a sustained growl not unlike a Nergal, Piotr or Sauron; and occasionally they layer in a higher pitched, standard black metal rasp. And then, above of all of this, they implement these vast and sweeping orchestral arrangements redolent of Dimmu Borgir's Enthrone Darkness Triumphant or Death Cult Armageddon. On occasion, a simpler atmospheric passage will appear in which the bass drums keep busy but they're trying to create a vacuum between the onslaught of terrestrial bodies.

I take some solace that the band is not necessarily a bunch of newcomers, but they've participated in a number of other acts like Eye of Solitude (also on Kaotoxin Records). Even then, though, you just can't prepare yourself for how much raw proficiency they've assembled. Perhaps the licks aren't the catchiest out there, but they're dextrous enough to keep the ears busy as they wind up another swell of orchestration; plus the drums are so pristine they're like mechanized gunfire. This sort of dense, brickwalled production clarity isn't for everyone (in particular not for the death metal patriot who prefers everything to sound like it's 1993 forever), but as a payload for this particular, ambitious cross-pollination of styles, I'm not sure how else it could be meted out so efficiently. From a songwriting standpoint, the various progressions here do seem as if they could be scrambled between tracks, and thus there's not a lot of emotional resonance, but nonetheless it's hard not to become invested in the 18 minutes of meticulous abuse on parade here. Unquestionably the voice of a whirlwind. An inferno. Keep all your limbs in the vehicle at all times.

Posted by autothrall at 5:32 AM