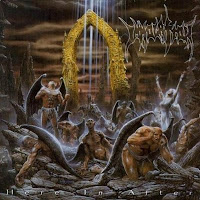 Here in After sees Immolation stepping slightly left of the Dawn of Possession debut, and it is perhaps the point at which the Yonkers outfit could really be dubbed a distinct entity in the field. That's not to say that I enjoyed this more than the debut, but structurally it's a more interesting and individualistic piece that abandons more traditional choices for truly atonal, creepy guitars, wedges of dissonance and unexpected melody, and grooving transitions that arrive like waves of black ichor lapping at an abyssal shoreline. Sure, they had been one of the victims of the Roadrunner imprint's decision to drop a bunch of their lesser selling death metal outfits, in favor of nu-metal or whatever shit they decided to bandwagon through the 90s, but they spent the four years between records to pretty good use here, and had they continued with the mildly more conventional style expressed on Dawn of Possession, they might never have left the ripples they have through the underground.

Along with comparable 90s classics like Demilich's Nespithe and Gorguts' Obscura (the latter of which is perhaps slightly influenced by this very material), Here in After seeks to expand the bounds of death metal with an uncanny palette of grooves in tunes like "I Feel Nothing" or "Away from God". There's still a bit of that slinking, creeping sensation culled from a Carcass, Autopsy or Bolt Thrower influence, but Vigna and Wilkinson have really crafted that into something more difficult to trace. The note progressions are somber and vile simultaneously, like lazy Elder Gods slumming around in their pajamas, but they've also retained those weird, popping squeals at the end of chord or single note phrases. The guitars are actually quite loud on this album, with a higher ratio of presence against the drums than on Dawn of Possession, and in particular this helps out Vigna's lead sequences, which are more meticulously crafted distractions here even though the tone is often pretty dry rather than atmospheric. The rhythm guitars batter you through the first few tracks, and never let up with their ominous chugging and a dark sense of humor. A lot of latent, mild melodic passages are woven through the punishment, like the opener "Nailed to Gold", but I will admit that these felt a bit predictable at times, and were one of the reasons I dug the album less than its predecessor.

Here in After's heavy dependence on crashing, grooving curvature comes with a caveat: that at any second, at the drop of a hat, the band might break out in a frenzy of Craig Smilowski's jazzy, fill-oriented drumming which is just as compelling as the debut. Just because they're exploring this new territory, doesn't mean they can't still lay out the blast beats, precise walls of double bass drums, etc. Dolan's bass playing has improved here, maintaining its clearly audible, bottom feeding catfish tone, but also crafted around a more enterprising series of notes that help to offset some of the rhythm guitars. His voice is somewhat less charismatic than on the earlier recordings; it's deeper, gruffer, and reminds me at times of David Vincent's lower gutturals from Morbid Angel's Domination, another album which arguably belongs to this experimental sect in the 90s. While fulsome and brooding, there were moments here where I felt like I'd like a little more dynamic range from his barking, because it does feel monotonous against all the jerking, tearing and rolling guitar rhythms and the truly expressive percussion. That said, it works here well enough that it's doesn't break the deal.

Have to admit, I didn't care so much for the first two tunes "Nailed to Gold" and "Burn With Jesus", and the album really only warms up for me with the title track and just about everything afterward. It's merely a case of not enjoying the embedded melody 'payoff' in the former, and there were some pretty boring brickwall riff/drum pairings in the latter. Once I got beyond that, though, the album was heavily varied and intense, with particular favorites coming in "I Feel Nothing", "Away from God" and "Under the Supreme". You can really lose yourself in some of these alien landscapes, across which the grooves seem like massive, churning and loping aberrations to which the listener is little more than a speck of dust. Seriously, remember those huge striding beasts from the film The Mist? Well, Immolation plays music here that wouldn't have been out of place as ambient radiation in their home dimension. The album isn't always immensely catchy, but it is unquestionably loaded with ideas that prove the New Yorkers were far more than a one-shot drop in the bucket with the great debut. I can understand how some fans regard it as their masterpiece, but sadly I can't honestly say I enjoyed more than about 75% of the content.

Production is superb, though. This was recorded closer to home in Hoboken, NJ, by a guy I'd never heard of, but once again, it does not sound like it has aged even an hour since the original release. Otherworldly and timeless just like the architecture of the songs themselves. Drums aren't quite so prevalent as the first album, since the guitars are more muscular, but I had no problem hearing everything, and most of the tunes have enough depth that you can listen through numerous times and pick out new details with each revisit. The lyrics here are decent, perhaps a bit more streamlined with the direct, Deicide style of antichristian sentiment than the Faustian burdens of the debut, but nothing to scoff at. The Andreas Marschall cover art here give us an update, or 'sequel' to the first album image, though some might be dismayed that the demons seem to be on the losing end... Immolation, however, is not on the losing end, and neither will you be for checking this out.