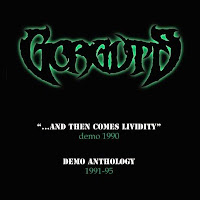 The concept of having quality cover art abandoned Gorguts after their sophomore effort (The Erosion of Sanity) in 1993; a pity, since they had some of the best of that generation. Perhaps they had never had the money or the desire, but suffice to say that if they couldn't make the Olympic Recordings efforts Obscura or From Wisdom to Hate the apple of anyone's eyes, a limited print demo collection through a teensy Montreal indie imprint (Galy Records) wasn't going to receive much more attention. But hey, this is Gorguts, they've got fans, and if those individuals wish to experience the band's formative late 80s material or their various album demos gathered in one place, in an official capacity, here is where it shall be done. Sadly enough, until the long awaited new hypothetical record arrives (supposedly this year in 2013), this was the most 'recent' material I've heard from the Canadians (there's a rare Netherlands live album floating around, but I've never heard it).

I'll say up front that I'm not the sort of person who often finds the demo recordings of albums superior to the later album cuts, which I tend to assume are the manifestation of the band's real vision for the material. It DOES happen, and certainly some of the 'official' versions are trumped by the more raw, energetic demos which possess a more authentic, visceral aesthetic. Gorguts' Demo Anthology is not such a case, and the later material sounds polished enough that I'd might as well listen to the album anyway. Differences are, at best, cosmetic. The Erosion cuts like "Hideous Infirmity" and the title track definitely sound suppressed, as if they were going for those muffled Morrisound chugging guitars to follow up closely with the debut, but probably the only curiosity among these is "Dissected the Adopted", a 1992 demo that was later renamed "Orphans of Sickness" for the sophomore; and only for that reason. The first album offerings like "Haemotological Allergy" and "Considered Dead" itself naturally sound the most raw due to their transfer, but I have to say that I did actually dig the more resonant atmosphere, the very pluggy and distinguished bass; a pretty live/rehearsal vibe happening there if just for the age.

By far the most attractive material here was the full 1990 demo ...And Then Comes Lividity, if I'm not mistaken their second (but the two tunes on the original are recycled for this), and it's a sweet deal due to the presence of non-album material. Surprisingly, this is not your usual thrash evolution of a death metal band, but the same straight up clinical, morbid songwriting style that made its way onto Considered Dead. Vocals were pretty close to Chuck Schuldiner in approach, perhaps a little deeper; bass is swarthy, bustling and just as loud as the rhythm guitars, which shift between chugging grooves and flights of tremolo or bristling melody from a mortuary slab. Though the demo shows its age, it was incredibly tight and consistent through the 15 minutes, and no question largely responsible for their Roadrunner signing during the death metal boom. All the songs are good, and the recording, by Obliveon guitarist Pierre Rémillard, was to me just as clear and quality as the studio work for the debut.

In short, ...And Then Comes Lividity a treat, and if you're interested in purchasing or auctioning a copy of Demo Anthology, it's going to come down to wanting this and not being content with a download of just the demo. Otherwise, I can't say that this is a highly effectual collection; none of the later material was interesting to listen to anymore than the updated renditions on the albums. Sort of a waste of space, and drags down the overall value of the anthology; but hey, that one demo was pretty good.