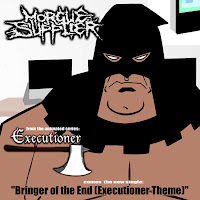 Executioner looks to be another of those ultra violent comedy 'toons in the vein of Metalocalypse, Superjail!, and the ill-fated Korgoth of Barbaria (which I really wish had gotten a full run beyond the pilot). With comedian Brian Posehn voicing the lead character in the gravelly, menacing tone you might expect, it definitely looks to prove entertaining for the cross-section of cartoon fans, extreme music junkies and stoners generally attracted to similar series, of which I probably must include myself, being a hardcore follower/DVD collector of Space Ghost Coast to Coast, Sealab 2021, Aqua Teen Hunger Force, and the Venture Bros. But what's really sweet about Executioner is that, being a slightly more underground production than those I've named, they've also gone with an underground band for the OP theme, specifically Morgue Supplier out of Chicago, who you might recall from their great 2009 EP Constant Negative.

I've watched the brief clip I was given of the song playing alongside the animation, and then listened to the track on its own a number of times, and I have to admit it's consistent in quality with the earlier material I've heard. Spastic, jerking death metal with parallels to grind and dissonant, mathematical metalcore (Burnt by the Sun, Coalesce, etc.) Dense, chugging chords are alternated with bursts of blasted intensity, while the chord progressions always have a highly textured, fulsome quality about them. Vocalist Paul Gillis uses a brute and primal death metal inflection redolent of Martin van Drunen, only with some extended growls and the accompaniment of venomous rasps as added viscera. The bass tone is swarthy, distorted and thick enough that, in combination with the shifting rhythm guitars, create a corpulent atmosphere unto themselves, which doesn't exactly require melody or lead guitar spurts to round it off, especially within the confines of the brief track length (about 2:40). Drums remain tight when varied through the blasted outbreaks and the loping, massive grooves, and in conjunction with the fat rhythm guitar chugging it's all quite forceful.

It's a digital single, released through Itunes and other sites, and unlikely to appear in its full incarnation once the episodes begin airing on YouTube soon through Rug Burn cartoons (who are also putting out animated clips of the Axe Cop comic). However, as a teaser for a hinted new Morgue Supplier full-length, this is certainly something to be excited over. It fits in seamlessly as a transition from the earlier material, and deals with a balance of older and contemporary influences that you don't hear all too often of late. I can't promise that this particular track is painfully memorable, but its abusive and concussive enough for fans of death and grind hybrids which think outside the box without seeming trendy or insincere (see also Flourishing). Well worth a listen, and hopefully the cartoon itself will not prove a hack job, and live up to the brutality..."Bringer of the End" ensures that Posehn and the animators have their work cut out for them...but enough of my bad puns, check out the tune.