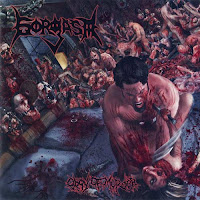 Judging by the band's revolving lineup history, it wouldn't have been a stretch to guess that an eight year gap between releases would likely mean an entirely new lineup for Gorgasm. Only the the band's central creative figure, guitarist/vocalist Damian Leski returned after shelving the project for years, but it's almost remarkable how Orgy of Murder seems like a pretty direct continuation of Masticate to Dominate, with only a few difference aesthetic choices that help to better place it in the modern brutal death metal context, a scene that's become thick with 'slam' death acts and other extensions of the 90s sound. Well, this time he surrounded himself with 3/5ths of the fellow Lafayette Indiana act Sarcophagy, all of whom also played in Human Filleted (I've written a few reviews of their albums), and certainly this is the most tight and professional roster he had yet assembled, though how much of this can be attributed to performance vs. studio wizardry is anyone's guess.

In fact, were I to judge Orgy of Murder simply on its technical merits, then I'd have no choice to but to assign it some high grades. The production is cleaner. The new members perform together with an insane level of almost mechanical precision. It's occasionally a bit faster than prior material, and though I'm not sure I'd cite it as more 'technical', one could make an argument for that descriptor. I'd hazard that, at least for the first half of the disc, the songwriting is actually somewhat catchier than a lot of what I heard on Stabwound Intercourse, Bleeding Profusely, etc. Kyle Christman's drumming isn't necessarily standout in such a wide field of bands performing at the same speeds and ability level, but it's effortless, all-purpose blasting and rabid kick speeds which are basically mandatory when playing music of this nature. They've always had some good bassists in this band, but Anthony Voight's performance here might be hands down the most technically efficient, especially when he gets a nice, wavy fill going as in "Exhibit of Repugnance". The vocals implement a lot of atmospheric, sustained growls which are often panned against one another to create a more cacophonous haze above the instrumental punishment.

Usually, the samples used on such albums provide just a few seconds of silliness to help emphasize the irony of the lyrics, but here, Gorgasm actually created some genuine freakout pathos with the opening sequence of "Cum Inside the Carcass". Just think about that, some killer cannibal telling you you're pretty soon just going to shat out of his body? Hideous (and effective)! I also dug that there was a continued sense of musicality in the faster riffs. Sure, you've still got your obvious hat tipping to Suffocation or Cannibal Corpse, but a few of the more melodic structures reminded me of Death's progressive material in the 90s, or the very clinical and unforgettable sense of riffing you got off the Pestilence debut Mallevs Maleficarvm. The songs have largely returned to shorter, 2 piece vignettes, several of which feel as if they're all over too quickly, but on the whole it's got a comparable duration to the prior album, and not quite so harried as I felt with Bleeding Profusely a decade before this. There's also a good deal of variety here, and it's possibly the most difficult of their albums to pin directly to particular influences...it's not 'unique' or 'unusual' for this niche in death metal, but it's fairly well rounded and hints at self-identity.

If there's one factor here that holds it back behind its predecessors, though, it has to be the breakdowns. Gorgasm was no stranger to implementing slower palm muted hooks to maintain the moshing furor of their audience, but on Orgy of Murder they feel rather forced and uninteresting. Almost as if they wrote an album with some decent faster material and then decided it wasn't slamming enough for the fan base they'd be facing in the 2010s. As such, many of the progressions seem unfit and bland, the sort you'd find chocking up the entirety of just about any second rate slam death metal record in the past few years. They're not really 'terrible' or anything, it's just that they don't add much to the flow of the other note patterns, and so they come across as pandering and unnecessary. It's not entirely a deal breaker, but I just feel as if I've heard them all before and that Gorgasm is simply more fascinating playing at a higher speed; and they transform what otherwise might have been a damn solid effort into one that just barely scrapes by.

But, hey, there are worse crimes than being just a 'good' death metal band, and Gorgasm have definitely established themselves in that classification for well over a decade now. Through all the intensity and the technicality, you still get those delicious hints of old school tremolo riffing and authenticity that date them back to their influences, and for nearly a decade of absence (other than one demo), it's impressive that Leski can snap the project from its hibernation and back into shape. Worth hearing if you're into their earlier work, or any of their peers on the Brutal Band imprint, or if morbid and misogynistic subjects like "Infection Induced Erection", "Axe to Mouth", "Third Degree Taste" and "Erotic Dislimbing" even remotely intrigue you...the lyrics to that last one...god DAMN, Gorgasm. You have soiled my spirit and scarred my psyche forever.