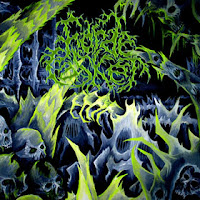 I was initially drawn to Landscape of Cadavers for a number of superficial reasons: the heavily stylized artwork was appealing, the title was aesthetically perfect for a death metal record and hell I even loved the band's name, vague enough that I wanted to figure out what the band was all about.  Upon listening through it, the attraction dissolved, not that they've put in an immensely poor showing on this debut, but Horde Casket (whose members hail from the Texas/Oklohama region) simply wasn't peddling anything that you couldn't acquire elsewhere, even a decade earlier, in the field of pure, gore-obsessed brutality. Production and songwriting here are second tier at best, choppy and suffocated with its own intensity, but that's probably the worst I could say for it.

Clearly Suffocation played a huge role in not only inspiring, but shaping Horde Casket's approach to the genre, so expect a lot of semi-technical thrust, staccato rhythm guitar mutes flying all over the place and occasional spurts of tremolo despotism like someone having trouble with a stubborn ketchup packet over their French fries. The lower fidelity mix of the album recalls albums Effigy of the Forgotten, Breeding the Spawn, and to some extent the first few Cannibal Corpse efforts, which is reinforced by the blunt guttural vocals, which to me resembled some of the faster paced Chris Barnes inflections (with a little Mullin and Corpsegrinder blendered in for good measure). In fact, though it might just have to due with the band's production budget limitations so early in the game, Landscape of Cadavers seems intent on resembling its 90s forebears more than the ultra-brickwalled modernity going on through the 'oughts. For some listeners, that will prove refreshing, and others it might seem meek and dated, but I think the music is riffy and busy enough to distract the ear away from any such hurdles, even if it isn't ultimately that interesting.

The guitars are fairly spry, thin and punchy in conjunction, resembling the older Deeds of Flesh records where I always had the impression that the potency of what they WANTED to play just didn't translate to what was pouring out of my speakers. That said, they inject a lot of death/thrash like vivacity alongside the brute fundamentals. This is an album of explosions, like a chain of landmines going off in meticulously plotted succession. Bass is dry and murky while the rhythm guitars are clattering away, but at a few points it will be left on its own via some fill to remind you that it's actually there. The vocals are nothing outrageously new or compelling, but there's a bit of sustain and reverb to them that bounces them around the drum tones. And speaking of which, this is yet another monstrous, inhuman performance involving loads of blasts and rumbling walls of double bass, the but the latter feel suppressed slightly by the guitars. Probably the worst offense here are the leads, though, which are simply smothered by everything else. They'll start tearing out this frenzied flight of notes (like that near the close of "Repository Necrotic Inception") which hang barely at the edge of perception...

Again, most of these flaws can probably be written off to budgetary constraints rather than any ill intention of the musicians, but those solos should be front and center, or at least more level with the rhythm section. For if Landscape of Cadavers lacks something, it's atmosphere. Tracks like "Back Country Meth Massacre" and "House of the Repulsive Mortifying" are fun enough if you're just seeking out more of the same you've heard from the rosters of Unique Leader, Sevared, or its own Pathologically Explicit Recordings imprint (from Spain); yet overall the riffs aren't memorable enough to serve as a breakthrough in a scene crowded to the point of bursting. Horde Casket has no delusions about itself, and if you're in the mood for 24 minutes of head pounding circa Deeds of Flesh, Suffocation, Gorgasm, Severed Savior, Human Mincer and Flesh Consumed, then cannibalize to your heart's content. I've heard far worse, but the superior sophomore outing Slab of Infinite Butchery is a better entry point for new listeners.