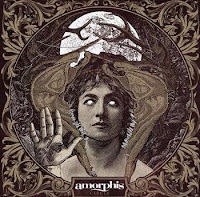 'Were we listening to the same album?' I hate to service such a cliche, but after seeing some of the overwhelmingly positive reactions to the latest Amorphis effort, I found myself asking that same question at least a half dozen times. My own initial response to Circle was that it was a middling but tolerable affair which did little to build upon any of their considerable body of work, but nestled safely between the progressive rock and folk metal aesthetics the Finns have been flirting with since the incredible Elegy back in the mid 90s (still a favorite). Further listens have revealed that is in fact an exercise in retread tedium, and even if it avoids the status of an outrageously 'bad' disc, I find it easily the worst of the Tomi Joutsen era, and their least interesting output since Far from the Sun...perhaps it's celebrating a 10 year anniversary of that mediocrity?

The arrangements and production values of Circle are nothing to scoff at, and it really gleams through the speakers with its overabundance of melodies, but it seems that a great deal of riff writing has been sacrificed in the name of accessibility and atmosphere. The rhythm guitars are tremendously boring throughout the record. Mindless amateur chugs like the nearly nu-metal bounce opening "Hopeless Days", or laying down the foundation to the verses of "Mission", abound here, and I cannot recall a single rhythm guitar pattern over the 46 minutes of content that drew my attention. Remember when this band was capable of right hooking you with an unforgettable melody that could burn across the decades (i.e. most of the guitars on Elegy)? These are but a distant memory, replaced by the simulacra of banal grooves and background chord patterns which almost seem subservient to the vocals and brazen synthesizer melodies which strike like a dawn's early light over a grassland plain upon which nothing much is happening. Lead-like melodies are likewise ineffectual, cleaner guitars or proggy Tuonela-style picking just there to further flesh out the atmosphere rather than author some memorable note progressions.

It says a lot to me that almost any random song of Eclipse, the first Joutsen-fronted album, is greatly preferable to anything on this album, and that was hardly the pinnacle of Amorphis' creativity. Even where the band attempts to get heavier, bringing back the harsher growls, or a denser groove, or a tremolo picked guitar riff (as in "Nightbird's Song"), I was nearly bored to tears. Most of the 'folksy' melodies in tunes like "Narrowpath" seem like they were plucked off the cutting room floor of a band like Alestorm, and the various flute solos and other rural, archaic moments though the album are not themselves capable of summoning up an interesting melody to justify themselves. It's as if they were just placed on the album for a muster of the ranks. Organs? Front and center, sir! Flutes? Still got 'em, captain. Amorphis was once so excellent at weaving together the 70s rock, blues, folk instrumentation into the harder rhythm guitars and melodies, but this all seems like a phoned in par for the course, reinforced only by a pretty sweet engineering job. The bass and drums are pristine in the mix, but rarely does either do anything interesting except rock along to the rather standard riffing construction while the keys flutter through the pennants above.

As for Joutsen himself, he admittedly puts on a pretty diverse and satisfying performance, blending both the clean tones of his predecessor with some more emotional, 'heartfelt' Gothic metal twine that unfortunately makes half this album sound like it could have been written by one of their Finnish neighbors like Charon or To/Die/For. The harder growls aren't particularly convincing, and in fact the entire use of the scarce, heavier sequences on Circle seem as if they were just implemented to shut down the naysayers who think the band has entirely sold out its death metal roots. But listen to just about any comparable passage on Silent Waters or Skyforger and the quality really seems to have taken a dive, especially these terribad boring palm mute chugging elements that are about as bland as week old diet white bread. Another frustration was that every time I was mentally imagine some series of rhythm guitar chords or one of Tomi's chorus melodies reaching an expected climax, it always seemed to misfire into some vapid configuration. Completely unexciting stuff...

To be as fair as I can, a few of the later tunes like "Enchanted by the Moon" or "Into the Abyss" are fractionally catchier than the first half of Circle, but not to the degree that I'd dub them impressive. It seems as if Amorphis has chosen to rest on its laurels here, whereas in the past they were this constantly evolving, fascinating entity who I held very high standards for. A safe album, and TOO safe, if the lame lyrics to a tune like "Hopeless Days" are any indicator. 'I never wanted/I never wanted to be born/Into this cruel world/Into this cruel world I was torn'. Tomi's coverage of these was so cheesily emotional that it summoned to mind memories of Zach Stevens' miserable presence on the first two Savatage albums he was involved with. Yuck. Granted, there are traces enough from Elegy, Skyforger, Tuonela, and other works to sate those simply seeking more of the same, but none are handled quite so adeptly as they were when first introduced into the Finns' matrix of sounds. Quite a bummer, because even though I wasn't in love with their last LP The Beginning of Times, they'd been on quite a roll since acquiring Joutsen. This did nothing for me.