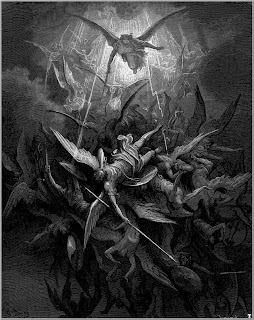 “To leave this paradise, but shalt possess/A paradise within thee, happier far.”

Paradise Lost, the 17th-century epic poem containing over ten thousand lines of verse, contains the story of the Fall of Man and expulsion of paradise, along with seemingly endless descriptions of Hell and fire and death.  The theme of the story is to “justify the ways of God to men.”  Milton, though a writer of such fire and brimstone, was noteworthy as a forward-thinking individual, espousing values of education and divorce as a viable option for those who are not compatible.

Influenced by Dante, the then-blinded John Milton penned two epic poems, Paradise Lost and Paradise Regained, during the final decades of his life.  Though creating a vision of “Heaven, Hell and Paradise,” his message sought to discuss philosophic matters such as issues of knowledge, sin, and free will.
The volume is epic in every sense of the word, with biblical prose, and sweeping descriptions of horrible, alien landscapes with lakes of fire, and damned souls.  It explores, seemingly on every page, deceit, redemption, and retribution.
PERSONALITY AND APPEARANCE OF SATAN

Satan’s appearance, as one might expect, is a terrible one.  Far from the stereotypical cartoonish devil, cherry red, sporting a pointed tail and horns, Satan is depicted as one of incredible size, “midst a horrid vale.” [Paradise Lost 40]  On leathery demon wings, Satan presides over his damned realm filled with spires and a bottom singed with stench and smoke, “such resting found the sole/Of unblest feet.” [Paradise Lost 142-144]  Parallels can be drawn with other dark lords of fiction, such as Sauron from Tolkien’s Lord of the Rings saga, and his plagued realm Mordor.  Also noteworthy is the use of fire in terms of ill will, destruction, and lost hope: perhaps gathered by the age’s fear of fire.  Consider: Paradise Lost was published almost exactly one year after the Great Fire of London in 1666.
WHY DOES ADAM DECIDE TO STAY WITH THE FALLEN EVE?

Descriptions of why Adam would choose to remain with Eve after betraying God, and Adam are, in a way, not unexpected.  The age-old trope of lovers caught together in a convoluted spiral, most likely doomed, is repeatedly explored.  Adam states though Eve has forsaken God, he would not wish for another partner, even another Eve if God chose to create one.  He stands by her in her sickness of sorts, stating “My own in thee, for what thou art is mine; Our state cannot be severed, we are one, One flesh: to lose thee were to lose myself.” [Paradise Lost 139-141]
Once again, Modern literature clearly referenced these old ideas.  Themes such as these are explored in Shakespeare’s Romeo and Juliet, as well as countless other forms of cinema, and storytelling, such as characters Brendan and Em in Rian Johnson’s neo-noir picture Brick.  One line states almost exactly Adam’s sentiment toward Eve, where Brendan yells to his girlfriend Em in a flashback: “You’re the only thing that I love!  You’re the only thing that I love.”
WHAT MESSAGE DOES THE ANGEL GIVE TO ADAM?

In Book XII of Paradise Lost, upon Adam and Eve’s expulsion from Paradise, the Archangel Michael is sent from Heaven to deliver a message to the two lovers.  He seems to espouse good values, as ever is preached in religion, and teaches the opening quote of my paper: to find Paradise in one’s heart, not in material values or even a literal Paradise.  The awe-inspiring Michael’s message, in the end, is a positive or perhaps bittersweet one, despite the negative nature of the Expulsion from Paradise.  “That ye may live, which will be many days, Both in one faith unanimous though sad, With cause for evils past, yet much more cheered, With meditation on the happy end.” [Paradise Lost 191-195]
With that, Adam and Eve are expelled from glory by Angels with swords of fire.
The story of Paradise Lost is one that everyone should know.  It explores classic, no doubt prehistoric, themes of love, loss, betrayal, grief, piety, and retribution.  Simple analysis of the text leads one to draw parallels to other works of fiction, evident even works less than ten years old, and certainly works of the future also.  In its haughty Biblical prose contains countless valuable messages, and even awful descriptions that paint a grim landscape on the mind’s canvas.  In Paradise Lost we learn that misconceptions regarding Satan’s appearance warp our view of evil.  True evil, as thought by Milton, is terrible to behold, large, spouting fire from extremities, wheeling in a sadistic, sulfurous realm on dark wings.  Also learned is the fact that even in such a dark tale, positive messages can be found from the mouths of angels.  Finally, that Adam’s reasoning on staying with Eve is unsurprising, and perhaps even expected.
Milton said before his death, “Who kills a man kills a reasonable creature … but he who destroys a good book, destroys reason itself.”  One finds it difficult to think of few better ways Milton could have propagated knowledge, thought, reason, and learning than to write cornerstone work of literature such as Paradise Lost, which has challenged and delighted readers for half a millennia.
“Let us descend now therefore from this top/Of speculation; for the hour precise/Exacts our parting hence …” [Paradise Lost 178-180]

http://www.dartmouth.edu/~milton/reading_room/pl/book_1/
Posted by JD at 4:17 PM