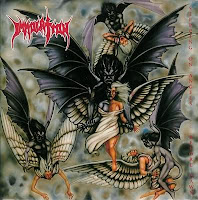 While it often takes a band many years into its career to assemble their demos and rarities into a fan package, Immolation struck fairly early on with Stepping on Angels...Before Dawn, put out through the Repulse Records out of Spain just before the four-year anticipation of the New Yorkers' sophomore Here in After reached a boil. Almost as if the band wanted to just get it out of the way, reveal their embarrassing past, and move forward from that point on. Only the material collected here is not only comprehensive, but it's not at all embarrassing. What you've got is a chronological collection of demo cuts which follow Immolation's gradual transformation from the death/thrash roots of the 80s to the formidable act we today recognize, all in one place, with no bullshit and no sense that they've left any stone unturned. I can't promise you'll be able to track down a copy without resorting to illicit means, but if you're interested in hearing where the New Yorkers' came from, Stepping on Angels... bares all.

The earliest material hearkens from when the group was known as Rigor Mortis, before Ross Dolan had entered the picture. Guitarists Robert Vigna and Tom Wilkinson were present, and they wrote a brute but concise form of mid-paced thrash, with death barks and bass contributed by Andrew Sakowicz. The best comparisons I could make would be to Hallows Eve, Infernal Majesty, Hellhammer, Possessed, early Hexenhaus, with the slower Slayer chugging sequences. Not too exciting, and the spikes of lead guitar feel frivolous and indulgent, but there's certainly a lot of urban anger in there and the recording was adequately punchy and convincing. Four tracks are present from this period, covering two 1987 demos, and I'd say they were all fairly level in quality, though nowhere near as impressive as what would come later. All in all, these tunes are nothing to be ashamed of...think of a more primitive, simplistic forebear to something like fellow New Yorkers Demolition Hammer and you're in the right ballpark. I can't honestly say that they would have made for a standout thrash act if they had headed further in that direction, so the later changes make a whole lot of sense.

...and then we're into Immolation proper, with a bunch of material from their s/t demos in the 88-89 years, about the time death metal was beginning to really explode through bands like Death, Pestilence, Morbid Angel, Carcass and Obituary, and you can hear a similar transition here. The riffs were faster ("as on the eponymous "Immolation"), more brutal and technical than the Rigor Mortis fare, with some vicious tremolo picking ("Dawn of Possession"), and the solo swaps both writhing and evil. With Ross Dolan now in the band, you got these hoarse, callous growls that were like a mix of Jeff Becera, Chuck Schuldiner and David Vincent; and the drumming more intense with some cold, moderately paced blast beats. The one downside to this is that just about all these tracks were re-recorded for Dawn of Possession in 1991, with a far more wholesome and dynamic mix thanks to Harris Johns and the band's improved musical proficiency. You get a few different versions of "Despondent Souls", for example, but I prefer the album take. While aggressive, tight and worthy of landing the group their Roadrunner deal, these do feel a bit dry in the greater context.

The final chunk of the mix is comprised of five live cuts culled from two performances; the first in New York (1988) and the second in Pennsylvania (1989). They sound like what you'd expect: raw and punishing with a barely tolerable mix that was probably a lot better if you were in attendance. That said, you can make out most of the guitar chords, the drums sound pretty poppy and the death grunts are obvious, though somewhat drowning out the musicality due to the primitive recording. The latter two, from the Pennsylvania gig sound somewhat more stereo and bassy, but likewise murkier. You can hear the banter between selections, with the heavy New Yorker accents, and I dig that they chose such early lives to keep the whole collection in context, a clear statement that this was all the past and they're proud to share it. Also, hidden in the last live original, there are two complete cover songs! "Charred Remains" by Autopsy and "Morbid Visions" by Sepultura, the latter of which they manhandle with more efficiency than the Brazilians probably could.

I realize that I'm usually pretty hard on these things; Stepping on Angels...Before Dawn is a bit difficult to criticize, because it's precisely the sort of collection I appreciate: humble, complete, and well structured and ordered so the fan can follow the band's journey. But honestly, other than a brief curiosity, there's not much impetus to choose this over any of their full length studio offerings, and I feel like the unreleased demo tunes were average at best. Still, even if this isn't something I'd often care to visit (if I weren't writing a review), I dig that I got to know the band. Where they came from, and perhaps where they were going. Definitely feels as if this was something the band itself had a hand in (alongside Dave Rotten/Repulse), rather than some mindless wallet grab by a larger label. You can't really ask for more than that out of such a compilation, but musically it doesn't stand alone so much that non-fans should really care.