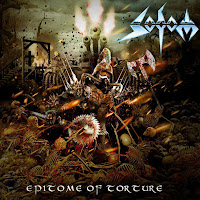 I wonder if Tom Angelripper ever gets into uncomfortable conversations during family dinners. Even if he were to eschew his thrash tag, surely if someone asks him about his band's name, and he answered, they'd be either shocked or perplexed. "Isn't that from the Bible?" "What does that word MEAN, Onkle Tom?" What about the first time someone decides to associate the words Sodom and Angel-ripper? Yikes. But it could be worse, he might have chosen Anal Cunt. At any rate, I feel like the man must have been taking some pretty eclectic meals lately, because album #14 from his mainstay takes a potpourri of ideas spanning the last 30 years of his career and then jumbles them together into a surprisingly fluid, if not entirely resonant or impressive concoction of classic and contemporary thrash metal which places a heavier than usual emphasis on arrangement. Perhaps as the band pushes onward into its golden years, the studio wizardry is beginning to supplant some of the raw thrashing energy once asserted, but I can't exactly fault Tom and company for trying to piece together their past into some new puzzle, and there is ample technicality and intensity here to at least run with the younger crowd.

Problem is, I just didn't get a hear a lot of payoff from Epitome of Torture. Dextrous, even furious riffing does little more than evoke comparisons to past records (of this or numerous other bands). There are rock riffs spliced through various points of the album that recount their later 90s fare, and some pure tremolo picking progressions dated back to Tapping the Vein; and at the same time, spiffy speed/thrash patterns one could date to Persecution Mania or Agent Orange. Bernemann's rhythms pursue a punchy tone during the mid-paced, palm-muted muggings, but once opened up into blinding speeds, they summon up Sodom's first forays into the more structural thrash post-Obsessed by Cruelty; like the six-string projectile bursts of "My Final Bullet" or the lightning licks inaugurating "S.O.D.O.M.", the latter of which serves as a throwback to classic cuts like "Nuclear Winter" or "Sodomy & Lust". They also pull out some moderate tempos ("Epitome of Torture", "Katjuschka", etc) which resemble modern Exodus, but then sadly devolve into some brickhouse, predictable groove thrash with amateur, primitive, uninteresting notation. I think, though, that while Epitome of Torture offers much variation on the whole, listeners will be quick to point out its more melodic tendencies, suffused with hints of traditional speed and traces of melodeath similar to Kreator's experiments on Violent Revolution or Phantom Antichrist.

While his bass playing is still formidable enough to support Bernemman without complete disappearing into the fog of war, much attention has been placed on Angelripper's vocals here. While I wouldn't say they feel excessively processed, it seems like they've been cut & pasted, panned and scanned so that each rusted bark, rasp or straight up death growl is meant to deliver some maximum belligerent impact. The man still sounds good, but unfortunately the actual choruses themselves never feel as poignant or memorable as I'd hoped. Sodom choruses have never been incredibly dramatic or complex, often rendered to a mere bludgeoning of the song title, but the riffs were often good enough that they'd stick with you for decades. Despite the fact that his voice is being so fully fleshed out, even the most moody and melodic arrangements (as in "Invocating the Demons") failed to give me the mincing the cover artwork might suggest. That said, when he's rifling off to the fiery, bluesy lead explosions and the level snares and kicks of Markus 'Makka' Freiwald (making his first appearance on a Sodom full-length), it certain seems like the trio spared no effort when putting this material together. And I had to crack a smile at Tom's enunciation of the word 'epitome'.

Ultimately, this has a sleek, meticulously polished mix and a vast array of weaponry that just never adds up to a raving success, which I was honestly hoping for since the band's German peers have been putting out some solid efforts of late (even the latest Accu§er surprised me). Granted, if you're a sucker for just about any modern take on veteran thrash, such as the last few works of Overkill, Exodus, Kreator,  Death Angel, Flotsam & Jetsam, and the like, then it's unlikely you'd find this entirely ineffective or offensive. It's one of those perplexing records which doesn't underachieve on anything except me giving a damn 15 minutes after the fact. Not the runt of their litter (as I don't hold much esteem for Masquerade in Blood), but an album that never really sinked past my outer ear drums even after listening the shit out of it. Offered slightly less of a concussion than In War and Pieces. And I'm not just saying that because it features such a grab-bag of components spanning their canon, or because I have some inbred aversion to them 'branching out'. Nah, just because this selection of songs didn't stir up my blood, or inspire me to bend over anyone of the heavenly host.