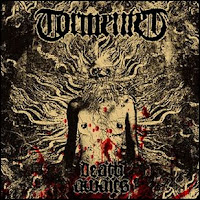 One of the elements that drew me to the Tormented debut Rotten Death was the voluptuous, soil churning stench of its production values, like a field of fermented dead breaching their earthen bedding and vomiting withered innards all over the listener. It was one of the more refreshing and entertaining spins on the ol' Entombed death & roll formula alongside Death Breath; these were old hands (Facebreaker, Edge of Sanity, Infestdead, etc) at the helm who knew exactly what they were doing, and the result was an enjoyable, if not far-reaching record with just the right timing to its pungent whiff of nostalgia. That said, the ensuing years have seen dozens of not scores of bands striding a similar, cemetery path, and as the Swedes' proper sophomore album arrives, I feel as if I've been irradiated with this particular strain of tributary death metal to the point that I'm well past glowing; burnt down to a disaffected shell. Once in awhile, a group will still come along that kicks ass in this niche, but I was sort of hoping that Tormented itself would expand its horizons and up its game for the follow-up. Something that, well, just hasn't happened...

Death Awaits is more or less Rotten Death 2.0, which might prove enough for the relatively easy to please crowd which devours all of this Entombed/Dismember worship on principle, but just felt less interesting to me the more I listened through. You're still getting those L-G Petrov like barks, the wrenching and dirty guitar tone, and oppressed, swampy production, yet the punkish, bruising d-beat-attuned rhythm guitars do very little to titillate the flesh craved appetite. Chord progressions seem like retreads of their last album and EP (or, to be more accurate, their influences), and at best you're getting a sequence where they'll ring out a few more melodic notes in unison to build an atmosphere. Not a far cry from how Rotten Death was put together, but if anything this successor seems less diabolic in its notation. Possibly because it's just not as fresh a style in 2013. The drums feel a bit crushed or muffled since so much emphasis is put on the guitar and vocal, though not inaudible. Bass guitar is abrasive enough to create that grinding Repulsion feel, fitting since Death Awaits is essentially a missing link between Clandestine and Horrified, but beyond any quirks I've got with the instrument levels, the compositions themselves just don't seem all that intricate or compelling; meaty enough to nod the head along with, but by this point we've just heard it too many times.

This sense of redundancy also carries through to the lyrics and song titles, which just feel like a bunch of obvious tropes slung together into verses and mundane chorus passages. At least three of the song titles involve the world 'death' in some capacity, much like the debut; so nothing unexpected there, but also not much to write home about. A few of the vocal patterns have a syllabic intonation redolent of Tom Araya ("Chemical Warfare", etc), but otherwise they'd seem straight from Wolverine Blues, Clandestine or Uprising. It'd be far more interesting for Tormented to elevate this aesthetic to some transient level; a transformation of that all too familiar tone and riff structure. Maybe not to a Tribulation/Necrovation level, which is rare, but somewhere more distinct and resonant than a mere rehashing of what they've already accomplished. Rotten Death was already the band's old school zombie infestation, and Death Awaits might have benefited as a more atmospheric, delectable paean to horror. As it stands, the sophomore scrapes by on its festered energy alone. 'Decent', sure, and diehards for the niche (Death Breath, Miasmal, Feral, Mr. Death, Puteraeon etc) won't have much of a problem remaining in this comfort zone, but where the first disc gorged on my entrails, this one didn't even break the skin over my stomach.