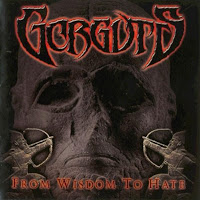 Where Obscura had the element of surprise in its favor, a progression for Gorguts by just about any definition of the term; From Wisdom to Hate doesn't make such bold leaps and strides into the unknown, and it sort of builds a bridge between its predecessor and the more easily recognizable death metal records of their past. If anything, this record transforms the discordant, sludgy, groove inflected oddity of Obscura into a more focused, intricate, and technical experience that just doesn't feel all that out of place or unexpected. A relatively 'safe' step in reverse, if we could really dub anything that sounded like this 'safe'. Though I would not deny that the songwriting is often faster paced and busier in some instances, and that the overall construction is still quite distinct and interesting compared to the brutality-by-numbers that many of their peers were dishing out at the dawn of the new century, From Wisdom to Hate just didn't grab me as firmly as its predecessor. It's pretty good, but far from exemplary...and not the masterpiece that I've always felt eluded Gorguts.

They've still fashioned quite the balance between the jarring surges of technical whimsy and the fluidity of the bass-heavy rumbling, jangling dissonance and cleaner guitar tone than their past. Again, I got the impression that to what might seem to some a wrenching morass of turbulent ideas, is actually quite a focused, concise experience with a fair share of rewards lurking about its labyrinthine countenance. Most of the better songs arrive at the half-way point ("Unearthing the Past", "Elusive Treasures"), but the styles and riff selections are quite consistent through the 40 minutes. Some of the caustic, barking vocals from Obscura have been dialed back to their earlier style from The Erosion of Sanity; a Chuck Schuldiner with a more robust, lower pitch; hell, this might have been Death's foray into progressive sludge/death in an alternate universe. The riffs are quite thick and adventurous, maintaining some of the Escher-like post-hardcore/jazzy resonance which falls somewhere in between Neurosis, Candiria, Prong and 90s Pestilence. I felt that the album was most entertaining when it hits its most spastic, spurious strides of wild fills and busy progressions of notes that just kept battering away at your sanity ("Unearthing the Past" being a great example of this), but the 'mellower' sequences aren't poorly done themselves.

From Wisdom to Hate has a lot of passages I'd consider decent if not ultimately so memorable. The nature of this songwriting style lends itself to a frustrating amount of points at which a series of notes was compelling enough that I didn't want to hear it flushed away so quickly in favor of proving how apt Gorguts were at rhythmic acrobatics; how much the band's collective memory could retain to impress us with their mental acuity and wizard-like proficiency. I'll say that my ears perked up a lot more for the latter half of the album. Leads seem to play a more impressive role on this album than Obscura (one region where this is superior), especially in spots like the bridge of "Unearthing the Past" where the choppy rhythm mutes perfectly counteract the solo's woozy, airy splendor. The presence of guitarist Daniel Mongrain (Cryptopsy, Voivod, etc) is clearly felt in the tautness and professionalism of performance. Also, the production is quite impressive throughout, possible the best of their output to date, even if it's not incredibly different than the prior album. The corpulent bass, the kick drums, the tinnier snares, tom fills, growls and various guitar tracks all fit seamlessly here, showing a purity of purpose that was perhaps shakier when they first embarked on this more experimental jaunt.

Unquestionably, this album (like Obscura) would prove an inspiration to bands like Ulcerate who also have learned to meander from traditional death metal into a more discordant, artsy aesthetic (though not quite as successful in my opinion). Again I'd compare this to Immolation, who have a similar penchant for quirkier or unusual riffing embedding in the standard genre tropes, but From Wisdom to Hate goes a little further out of the box than those New York veterans. This was a calculable, consistent entry into that 'New Weird' of death metal, steeped in a central historical/anthropological concept as basis for the lyrical ruminations. Does it express some reticence on the part of Gorguts that, perhaps, they might have gone a little 'too far' with Obscura? I would not argue that, but still...this was not your daddy's death metal, and it's ultimately more unusual than most of what I hear even now, well over a decade after. Since we've now experienced the broadest gulf yet in Gorguts' career (as attributable to tragedy as to lack of productivity), one must wonder where Luc Lemay and his Canadian craftsmen of the arcane and obscure might take us next?