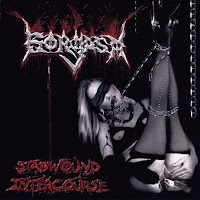 As relatively redundant as their style might have seemed, even by the late 90s when the whole 'brutal death metal' thing as its own self-sustaining evolutionary entity was but a few years old, one has to grudgingly admit that Gorgasm knew how to make an entrance. With one of the most provocative band names and titles, and 'evocative' cover images, at least to those low down dirty sick fucks who gorged upon this niche, you were not forgetting Stabwound Intercourse anytime soon. Add to that a spiffy production job and tight, technical musicianship and you had one of the more explosive young acts to come along post Deeds of Flesh or Cryptopsy, and one of the Midwest's most punishing sources of pure pathology alongside names like Fleshgrind and Lividity.

Truth be told, beyond the elevated level of lyrical sickness built upon the Cannibal Corpse blueprints, there was just not a lot of nuance or distinction in what Gorgasm were writing here. The punctuality and phrasing of the guitars is highly redolent of Deicide's first few records, only amplified to the level of aggression that New York's Suffocation brought to the field. Tremolo riffs are affixed to an impressive double bass drum performance by drummer Derek Hoffman (who later played on Fleshgrind's mediocre Murder Without End), and you've got plenty of palm muted frenzies and a few well timed breakdowns to help break up the bursting momentum like energy beams splitting asteroids for space miners. The leads are hardly adventurous or interesting, but at least they're there, tearing off the central riffing structures. The bass is just as dextrous as the rhythm guitar, with a lot of treble-heavy, farting propensity to make itself noticed, and I would have to think pretty hard to summon forth memories of another rhythm section that was so tight and professional so early on in a brutal death metal act's career...

Not to mention, Gorgasm made one of the most efficient, earliest uses of the toilet bowl, sustained gurgle guttural vocal that initiated a competition within the genre that persists today: who can create the deepest, butt-muddiest flushing tone?! Your prize?! A crate of obscure scatological Euro-porn?! There are a few occasional wretched rasped lines which remind me of Glen Benton's 'higher range', but in general you're getting this persistent, porcelain god pummeling that really feels fit to the strenuous performance across all the instruments. Unfortunately, where Stabwound Intercourse failed me was in the sheer quality of songwriting. Only a handful of the riffs across the six tracks of the EP really stick out, and the rest are forgettable within moments of hearing them. It seems that wherever the Indianans 'branched' out to explore a range of options they grew exponentially more interesting. For example, the classical structured death/thrash riffing break in "Coprophiliac" or the excellent use of the horn-synthesizers during the bridge of "Horrendous Rebirth", in which they cling dreadfully to the surgical sounding guitar progressions.

Otherwise, it's really just more of the same chugging, squealing and banal composition we'd already come to expect from the second tier of bands, and which sadly continues on through the 21st century. With lyrics about mutilating female genitalia, eating human waste, and initiating sexual intercourse with the posteriors of the deceased, there's a sense that this would 'sate' your average inbreed who jacked off on such sadism and misogyny, with is all well and good (if you're one of them), but it's just not an effort which stands up to long term scrutiny; largely because its few inspired moments of brilliance too easily trump the remainder. In hearing this after so many years, I just know that the Gorgasm members were capable of more curious atmosphere and musicality, and wish they had infused that influence more often. That said, if this is your thing, you could certainly do a lot worse. The 16 minutes of material certainly never lets up its onslaught (save for a sample), and for 1998 it was, if not unique, at least ahead of most of the flock to follow.