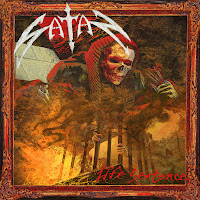 NWOBHM acts don't always have the best track records when it comes to their inevitable reunions and comeback albums. Groups I once loved like Witchfinder General and Angel Witch did not entirely impress me with records like Resurrected or As Above, So Below, while others like Cloven Hoof assumed modern, glossier production and stylistic aesthetics that turned off a good portion of their fanbases. I think a lot of this is that, in so many cases, having been 'out of the game' for so long breeds a sense of confusion between wanting to resurrect 'what they were' with what's out there in the field of today. In a world where Dragonforce is sadly but arguably the most popular band in the entire heavy/power metal spectrum outside of titans like Iron Maiden and Judas Priest, where will these old timers fit in? Thankfully, Brian Ross and Satan dodge this entire question by picking up right where they left off, as if the past 26 years between Suspended Sentence and Life Sentence never happened...

The logo is back. The title theme and cover artwork is flush with the first two records in the 80s. But most prominently, the sound is much the same. Granted, the production is understandably cleaner than on the earlier works, and the musicianship also more pristine, but otherwise it's direct continuity. Whereas many of these comebacks feature only a handful of the original lineup, Life Sentence is a COMPLETE reunion, with all five members of the Court in the Act roster returning: Brian Ross (vox), Russ Tippins & Steve Ramsay (guitars), Graeme English (bass) and Sean Taylor (drums), all of whom are older and wiser after stints with bands like Blitzkrieg, Blind Fury, Pariah or a little known group called Skyclad. But most importantly, they've brought back the crucial component that has earned them the adoration of traditional metal addicts incessantly for the last several decades: the riffs. Satan was one of the first bands of this niche (beyond the more popular groups like Maiden, Def Leppard, Motörhead and Raven) that I had explored as a kid. I guiltily admit, initially, their name had a lot to do with picking up their tapes, but once I placed them in the deck, I was immediately taken aback by the refreshing musicianship, with busier guitars and melodies than I often associated with simpler acts in the same scene.

So I don't speak lightly when I say that Life Sentence is the band's most consistent and intricate recording to date, and hands down their best, building upon the two strong predecessors that enabled their legacy. The guitar riffing here is slick and dextrous without becoming obsessively indulgent or flashy, and no track passes without some head spinning progressions that marry the techniques of antiquity with the prowess of younger musicians. Experience the storm of harmonics and speed/power metal licks coursing through "Life Sentence" itself, the sub-thrashing tempo of "Twenty Five Twenty Five", acrobatic melody runs in "Testimony", or the darker, spiraling contours of "Personal Demons" and "Cenotaph" and you'll come to share my opinion that, along with Attacker's latest Giants of Canaan, Life Sentence is likely to go down as one of the best guitar-oriented records of 2013. Each lead is carefully constructed, thoughtful and interesting, while the brighter spikes of speedy tremolo picking channel classic Maiden, and there are incredibly few note patterns here that can be predicted right off, which is all too rare for this genre as a whole...

But Tippins & Ramsay alone do not get all the credit here. English's lines are constantly swerving, grooving and natural, never par for the course or second fiddle to the rhythm guitars (if you'll pardon the Skyclad pun). The tone is clean but more akin to psychedelic/prog rock than, say, your usual Steve Harris muscular thudding. I could honestly just listen to Graeme and the drums alone and still derive enjoyment from the songs, if that says anything to you. Taylor's performance is about as organic as you can hope for, with a nice old snare tone that plays well into his varied fills and cadences; just hectic enough to support these waltzing and gallivanting guitar lines all over their respective fret boards. Lastly, but not leastly, Brian Ross has not skipped a damn beat; if anything, his mid range here, one of the band's long distinguishing traits, is even more robust than the early years; though he'll still mete out some occasional, elevated screams. All that time spent keeping the Blitzkrieg torch burning might not have resulted in a string of phenomenal recordings through the 90s and 'oughts, but if it primed him for Life Sentence, all the power to him, because he's just as catchy as he was on Court in the Act or A Time of Changes. Ross even leads the charge for some outstanding harmony arrangements.

Above and beyond all of these compliments, Satan does not sound 'old' or 'exhausted' in the slightest here. Comparing this record to, say, Manilla Road's latest, or the last album Diamond Head put out, is like comparing a lit firecracker to a tray of old cigarette butts (and don't get me wrong, I love my Lightning to the Nations and 80s Road quite a lot). I'd consider the songwriting and guitar picking here to remain adventurous and interesting, despite the overall moody and muddy darkened depths of the production, which are clearly content with letting the tunes stand by themselves. Not a unique approach, since a lot of veteran bands prefer the pure analog (or analog sounding) output, but with Life Sentence it helps generate this interesting contrast between nostalgic tones and very future thinking composition, even some of the lyrics, which vary between subjects like ancient Egyptology ("Incantations"), self realization/perseverance ("Life Sentence") and the ever-lingering potential for worldwide Armageddon ("Twenty Five Twenty Five"). It makes NWOBHM feel like new again. Like it's 'today', and forever, and not just something we need to restrict to bands whose balls dropped in the late 70s.

Sure, these blokes might never have really fallen out of practice, but if you told me six months ago that they'd be releasing a new album this, I'd have asked if you were planning on selling me snake oil with that. And then you'd be calling upon me to remove your boot from my teeth, because Life Sentence is outstanding. An audio dissertation on heavy metal redemption, which plays salutatorian to exactly NONE of the band's peers around today. Hail...well, you know...Satan.