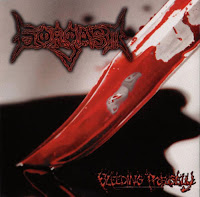 Bleeding Profusely is seemingly innocuous on the surface (cover art), perhaps a bit of a letdown if you're looking for something sicker. But then, I'd urge you to think back on the Stabwound Intercourse image, and then back to this, and somewhere in there lies a connection, intentional or not... uh, yeah... Of course, the continuity between that earlier EP and this debut full-length is more than skin-deep; the very bones and organs of the music seem lifted directly from the aesthetics of their older material. But once again there is just enough musicality and exploration, especially on the latter part of the disc here, that you get a nagging feeling Gorgasm were intended for more than they've ever gotten. Granted, they also carry forth some of the flaws inherent to the more middling bands of this style; only this time, there's enough explosive, dynamic musicianship and replayability that I can qualify the product as a success, if not a smashing one.

Like the 16 minute EP, Bleeding Profusely is extremely goddamn concise, clocking in at 24 minutes for 11 tracks (including a re-recording of "Disembodied"), which average about 2 minutes exactly. I am serious, when writing these things, the Indianans kept durations dangerously close together, and that right there gives a strict uniformity to the album. On one hand, it means you can probably listen to the whole thing during your daily commute, one direction. On the other, the brevity and precision of the practice doesn't generate a wide level of variation. These pieces are tight, and the band throttles you with as much as they can within their bounds, but a lot of the better riffs zip in and out before you really get a chance to let them sink into your mind and leave an impression. It would certainly not have damaged the pacing and flow of this record to incorporate a few 4-5 minute cuts with a few added repetitions of the better guitar progressions, since some of them deserve more space to breathe and beat on the listener, but at the very least no one could accuse Gorgasm of wearing out their welcome. This is wham, bam, thank you ma'am entertainment...even if that might seem a poor choice of words to describe an album containing "Fisticunt" and "Lesbian Stool Orgy".

But despite blowing its wad faster than a sexually repressed sailor pulling into a brothel after months at sea, there's a lot to admire about this record. The leads are intensely well constructed, and there are moments like that mean solo bridge at around 1:00 in "Severed Ecstasy" where the writing is so harried, dense and evil that they could compete with anyone else in the business. Gorgasm learned pretty quickly that brutality does not necessarily have to eschew musicality (despite what some of the mentally challenged, perpetual 12-year olds haunting the genre's fan base will tell you)  and Bleeding Profusely is flooded with tasteful arpeggios and classical shred inspired licks that constantly engage the imagination; a musician's dream. They've got their share of generic 4x-16x chug and bait-the-tremolo patterns, but even when they hit rock bottom with some banal palm muted progression, they're quick to shift up the playbook to something more satisfying. I found that a number of listens through the album helped me pick out some of the more flavorful details, and there is overall a more robust sense of technicality and flair than Stabwound Intercourse.

Not exactly more atmospheric, other than the improved lead/bridges and the use of more samples, but the rhythm section here is simply fucking insane, with the bass flying along a thousand miles per hour, and yet another mechanically taut drum performance, this time from Dave Culross (Malevolent Creation and now playing in Suffocation). I think the sole caveat here was that I found the vocals rather bland. They're the same assortment of grunts, toilet swish gutturals and snarls that they were using before, but for some reason the mix seems a bit dry, and though they attempt some charismatic, punchy staccato lines which feel more acrobatic, I didn't come away with as ghastly an impression. Which I guess is fine, because the lyrics to pieces like "Morbid Overgrowth" and "Fucking the Viscera", among others, compensate with enough of a gruesome jungle of splatter and disgust that you don't come away from Bleeding Profusely feeling in any way unsoiled. It's like a short slasher film in which all manner of debaucheries occur in just a brief span, leaving you ample time to vomit your popcorn into the nearest latrine, woods, or, if all else fails, date's lap.

This isn't their best album, and it's nothing amazingly unique, but definitely a step over the EP in structure and quality, a sadistically pleasurable way to kill 20 minutes or so...again with my shitty choices of words! I'd recommend it to fans of Cryptopsy's None So Vile, or other seasoned murderers like Deeds of Flesh, Lividity or Malevolent Creation; just don't expect the 'Mona Lisa' of brutality here.