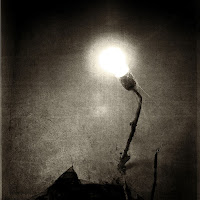 This album had been described to me as a mixture of black, doom and death metal elements, but ultimately it rests very heavily on the last of the three. There are a few faster chord passages erupting over the course of Denouement which are mildly redolent of melodic Scandinavian black metal of the mid through later 90s, but the consistent gutturals, slower groove chops and lead hooks all point to the retro death metal sensation, only Abyssal have their own approach to the medium which thankfully feels like considerably more than the umpteenth Incantation knockoff I've heard this month. Denouement manages to present itself as both labyrinthine and accessible, and packs enough surprise twists in its roiling and considerable mass to stand out among the hordes of imitators taking their cues from the 90s. Combined with its stark, minimalistic yet unforgettable cover image, and its intelligent and bleak lyrical ruminations, this is indeed a success, and thankfully Hellthrasher Productions has seen fit to give it an official release, that it may reach a broader audience than its initial run.

When first recommended to me last year, I was a bit hesitant upon seeing the longer length song titles, which often run the risk of dragging out death metal to parts unwelcome, but having recently also gotten into the debut of Anhedonist, I wasn't entirely turned off. Thankfully, the Englishmen incorporate enough sonic variety through behemoths like "When Paradigms Supplant Gods" and "Swansong of a Dying Race" that I never felt the expected ennui. That's not to say that all of the riffs here are a sure bet, and a good portion do drag behind the more exciting emissions of melody, but you won't have to wait long for something inviting to nest in your ear and whisper sweet, apocryphal nothings to do. Churning, steady palm muted chugging riffs are bewitched with backing streams of tremolo melody or atonally plucked, atmospheric chords that ring off into the asylum-like ceiling of the up-front production values. While considerably eerie, Denouement is a rather clean sounding effort, with not a lot of reverb hanging off the punchy rhythm guitar progressions. No, instead the haunting here is manifest through the contrast of the guitars and the monotonous bludgeon of the vocals, which shift between a shorter syllabic guttural to longer, sustained phrases. A 'beauty and the beast' dichotomy, though some of the guitars themselves are quite depressing and evil in structure.

Definitely picked up a 'cavern core' sort of reaction to the material (a term I use for the subterranean or claustrophobic death metal so popular this past half-decade), largely due to the grunts, but Abyssal are not afraid to impregnate the gloom with some outbreaks of arpeggios or dreary descending melodic phrases that avoid seeming out of place. The drumming is great, comfortable in slower rock or doom tempos but fully able to accommodate the spurious machine-gun kick patterns associated with the genre. I could make out the bass guitar, polished and thudding along gently beneath the guitar, but it too rarely stood out on its own. Far more interesting were the rhythms and leads as they explored a wide range of flavors and techniques, from the soulless and sluggish chords that setup "Celestial Dictatorship", to the blasting fervor of "Detritivore". One comes away from this record with a notion of musicality that surpasses its brutality, almost like a 'friendlier' Portal with a lot more evident hooks, and a far more tidy production standard which never feels as if you are wading through a rancid pit of unidentified offal and muck.

I wouldn't dub it extremely memorable apart from a few of its creepier progressions, but while devoured in its 50 minute sojourn to the edge of sanity, Denouement works well enough, and establishes a fairly strong compositional center. Hearing more variety to the vocals, without losing that sense of Elder God morbidity would really help round out the album, and perhaps ramp up the more frightening, dissonant note patterns in place of a few of the more predictable melodies. Ultimately, though, they've gotten something 'different' here worth expanding upon, and Denouement is certainly promising enough that I'll be checking out its successor, and you should also if you enjoy bands like Portal, Mitochondrion, Cruciamentum, Anhedonist and Antediluvian.