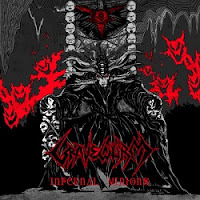 Primacy is a double edged sword in black metal. When implemented efficaciously, the reductionist riffing and raw production standards lend themselves directly to a crushing, satisfying or evil atmosphere that has unquestionable birthed a number of the genre's classics. Groups like Hellhammer, Beherit and Darkthrone never thrived on complexity or technical merit, but unfortunately these years there are a lot of bands who seem to lazily follow in the wake of such a sound, thinking that derivative, umpteenth-generational riff recycling and a raspy vocal alone seem to warrant some imply some underground heroism. I won't lie: I have often thought such of Gravewürm, an American band which has been outright 'bad', but certainly fits the classification despite their 20+ years of obscurity. Sometimes when I hear their music, I want to buy the guys a beer; after all, I, too can succumb to admiration of such unbridled, stripped mayhem. At other times, I just want to claw off my own ears due to the utter banality of their inauspicious songwriting...

That said, Infernal Minions, the groups ninth studio full-length since the turn of the century, maintains a few curious characteristics which piqued my interest despite itself, and overall more enjoyable than the last disc of theirs I heard (2010's Blood of the Pentagram). The foremost of these would be the voluminous, simplistic structures of the guitar riffs here, which very often felt more reminiscent of dirty, epic heavy metal than the morbid grooves and tremolo picked patterns one often associates with the style. Other than references to the late 80s/early 90s transformation of Bathory, which were already present on Gravewürm's earlier material, I picked up hints of 80s Cirith Ungol ("Beast of the Abyss"), Manowar, and Brocas Helm style bulky chords set at solid, middle tempo. Not taken to the level of Darkthrone's The Underground Resistance, but more of a direct skin graft onto black metal's aesthetic skeleton. Some of the deep end chugging reeked of Vanity/Nemesis era Celtic Frost, and then there were other moments where you could feel a clear punk/hardcore sensibility to the flow of the chords, which was of course an influence upon the older works that Gravewürm seems to carry the torch for. Occasionally they'll pawn off some simple melodic notes (as in "Mistress of Blood and Fire") along to the belly of the rhythm guitar, and I also detected a major doom vibe in a good portion of the eight tracks, so much so that labels of 'black doom' or 'black/heavy/doom' might befit this record just as well as a straighter black tag.

The guitars are quite loud and meaty here, driving most of the material's momentum, since they and the vocals tend to choke off many of the drum frequencies. Don't get me wrong, you can hear the kicks and snares clearly enough, but it definitely seems like they were trying to drop these chords and palm mutes on the listener like hammers used to brain livestock. The bass is rarely a presence unto itself, but you'll always detect the gross distortion hovering under the rhythm guitars. Eerie keyboards pads are used a few times throughout the album to supplement riff sequences, perhaps too directly, the one exception being "Dominion of Souls", where in union with the drudging chords it creates a creepy, crawling vibe that was probably the single most memorable passage of the whole 35 minutes. Unfortunately, even there, when they've got a relatively chilling thing going, the songwriting is dragged out, repetitive and dull. The payoff happens in the first section of the song and then nothing interesting happens afterwards. Also, I felt as if Funeral Grave's impetuous imp-growls felt like they belonged to someone younger; regardless, they aren't exactly a highlight of Infernal Minions, barking along in rather predictable positions across the mundane riffs.

And that's really the low point to the album: these are all pretty effortless guitar progressions not only fail to provide any surprises, but also fail to leave the evil impression I'd expect out of songs named "I Die for Hell" or "Nocturnal Inquisition", since they rarely evoke much of an unsettling, minor scale structure. Infernal Minions is a fraction warmer and bolder sounding than Blood of the Pentagram, and clearly more of a compelling direction to explore, yet the riffs feel as if they're just the first ideas that came to mind during a jam section, rather than meticulously plotted and inspirational. I didn't hate this album at all, but it'd be dishonest to state that this held up even after the first listen, much less the 3-4 rotation minimum I demand of myself when preparing for a critique. I didn't even care for the Kam Lee cover art, which is a pretty amateurish representation of some evil wizard or dignitary seated on a subterranean throne of skulls and severed baby heads, with cheesy red specters flitting about the cavernous backdrop. Frankly, I though the classic images they used on older albums like Dark Souls of Hell and Under the Banner of War were better, even if they were often lifted from pretty obvious masters of olde. Ultimately , while I want to like Gravewürm, I've yet to forge anything but a fleeting tether to the songs they evoke.