Azure Emote - The Gravity of Impermanence (2013) 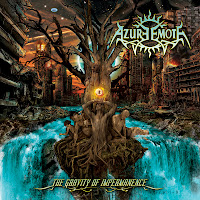 When first looking over the glorious presentation of this album, I felt the pangs of familiarity, then realizing that I had actually listened to the first, cleverly titled Azure Emote effort Chronicles of an Aging Mammal a few years back. This is essentially a project of the inestimable Mike Hrubovcak, growl god with a resume that includes Monstrosity, Vile, Divine Rapture and XXX Maniak. Joined here by drummer Mike Heller (Fear Factory, Malignancy, etc) and guitarist/bassist Ryan Moll (Rumpelstiltskin Grinder, Divine Rapture, Total Fucking Destruction), the goal is an avant-garde fusion of techno/industrial music, death metal and symphonic ingredients that are provided by a host of guest vocalists, synthesizers, and eclectic instrumentation. Very often, I felt like the actual ambition of The Gravity of Impermanence outdistanced its grasp, but the amount of effort lavished upon its construction and production is inarguable...

By this point, hearing orchestration or techno keys nudged up alongside traditional death metal riffing is hardly novel, but if I can say something for Azure Emote, they totally throw themselves into it. Often when I here such an admixture I feel like its too heavily balanced towards the one end or the other, but here the Mikes and company experiment with genres somewhat evenly. The death metal riffing, for example in the opener "Epoch of De-Devolution", is the major constant through the 60+ minutes of material, but moored in earlier, melodic 90s playing with some slightly catchy tremolo riffs, grooves, or thrashing chug rhythms that serve as a seat to all the flighty atmospherics. There is a sense of virtuosity through the guitar solos (some provided by guests), and the affair as a whole creates a meandering, pompous vibe; as if Beethoven were alive, hanging outside a rave peddling ecstasy tabs while blasting Disincarnate (or similar) from his van; but I have to admire just how quickly these gentlemen are to throw all rules out the window, culminating in some of the truly weird moments of this experience...like the saxophones adjoining the operatic female vocals and arpeggios in "The Living Spiral"...violins, organs, video-game like keyboard runs...industrial hip hop jump up passages?!? ("Obsessive Time Directive"). Samples galore.

It's as hilarious as it is fucked, and produced with incredibly clarity. The bass guitars were probably the only letdown, since they seem like an afterthought, but the bright contrast between soaring, clean male vocals, the ethereal presence of Melissa 'Missy' Ferlaak Koch and Sandra Laureano (both of whom have been involved in a number of other metallic projects in the past), and the growls and rasps of Hrubovcak is well handled and engagingly dynamic. The guitars are crisp and rich, the drums effortlessly cast between blast beats and more experimental, subdued rock segments, and the keyboards run a massive range of sounds, some of which are appreciably cheesy and 70s/80s new wave, some given a more ambient din, and others trying to represent a mythic organ hall. Rarely will Azure Emote retread a particular rhythm or tempo, and even though there are 14 tracks here, none of them feels quite precisely the same. That they can pull off such a rhythmic and conceptual disparity is to their credit, even when the components and sections clash together without much of a natural, transitive flow to them.

Ultimately, though, I came away from this as an album of 'moments' rather than a truly consistent, engrossing experience. I have no question that there are brilliant ideas dispersed throughout the considerable playtime, but it often feels disjointed. Few of the rhythm guitar riffs are all that memorable on their own, and when they are (like in the first song), they are often beaten to death (pun intended). Amazing atmospheric segues will often erupt into some pretty bland, choppy Morbid Angel death metal blast beats and riffs with proggy synth sounds that don't really go anywhere other than to keep the material busy and eclectic. All the vocals are handled well, but the brutal levity of Mike's voice is often gimped by the fruitier instruments surrounding him. There are some very calculated, intense pieces here like "The Color of Blood", "The Living Spiral" and "Marching Forth" with its amazing instrumentation, but I'd say the composition is about 2/3rds inspired and then the last third is spent filling in the blanks.

Azure Emote is fearless, and the sophomore approaches its electro-symphonic-metal theatrical symbiosis differently than, say, Dimmu Borgir or Sigh, Septic Flesh or Aborym; but it's just that sometimes the spurts of brilliance are too brief and disappear beneath the impetus to keep the riffs flying, varied, busy, and slightly schizophrenic. Contemporary to a fault. Unabashedly 'now'. The poetic lyrics deal heavily in the concepts of the aging and passing of civilizations and individuals, as hinted by the title, and do so intelligently enough. In other words, its relevant stuff and not moored in gore. A good album from individuals who, with just a little more refinement, could have written an amazing album. But you won't hear much else like it this year, and that's saying something.