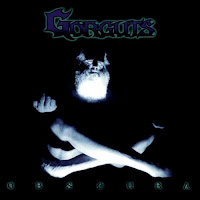 It was inevitable that, having reached critical mass, death metal would have ventured into more experimental territory, crossing over into new and other/otherworldly realms of sound, but while today's market has seen an explosion of such feats, the 90s were largely a different story. I can now reach into a hat and draw out names like Ulcerate, Baring Teeth, Flourishing, Portal, as obvious examples, all more or less relevant as successors to the record I'm about to review, but in 1998, were there a lot of precedents? Demilich, Supuration, maybe some of Disharmonic Orchestra's material, but by and large the emphasis of the genre was to push the underlying precepts faster and harder, to twist the knobs of brutality to their limits, to shock and appall both the built-in audience and ensure those 'outside the circle' would never opt into it.

Canada's Gorguts was already on a firm path to cementing itself as a sold second stringer in this bloodsport, putting a slight twist on the Floridian fundamentals of Death, Morbid Angel and Obituary with a few nods to the Dutch and New York scenes, when they decided not to merely shake themselves from their yoke, but to neigh, whinny, and trample the fucking thing to pieces. Considered Dead and The Erosion of Sanity were both albums I'd considered quite good, if not entirely worthy of the worship retrospectively heaped upon them in later generations, but Obscura was truly the moment where, in my universe, Gorguts became 'a thing' unto itself. No longer a band that I'd simply recommend to those seeking out sounds similar to the superior works of their forebears, but a 'you HAVE to hear this' entity. Clearly, having already emptied the beer fridge on the right side of their collective brains, Gorguts were finally sampling from the right side, and this translated into a jarring, compelling, out of body, out of your freakin' mind experience which drew upon elements of jazz, funk, sludge, drone, and post-hardcore as relishes to its gruesome vocal theatrics and the strange, almost Lovecraftian occult poetry of its lyrics.

Where do I even start with this goddamned thing? I think one characteristic of Obscura which has always stood tall to my ears was that it gives off this unusual impression of being 'messy' or squamous sounding, when in fact it is so rigidly defined and precise in structure and execution. Death metal is but the framework from which its swerving, thrusting, jabbing and churning limbs emerge. Let's be honest: without the Gorguts logo on the cover, it might has well been another/new project for Luc Lemay and crew. There is a direct linearity to the vocals, perhaps, but here they've been fleshed out between Martin van Drunen-styled open growls and more creepy, blunt and tortured guttural howls that give the impression of some wounded beast tracking across a sucking swamp, its blood mingling with the stinking, nutrient-rich swill of its waters. Totally fucked when you contrast the timbre with the more fitful, yet depressing prose of the lyrics, and certainly more 'charismatic' than the performances on either of the earlier records, though I can indeed understand why they might turn off some listeners anticipating a more conservative gurgle.

But the vocals are, strangely, the LEAST unique component to this bludgeoning Escher as it lifts itself from the gallery wall and chases the artsy staff around intent on their consumption. The guitars here are out of this world! Hypnotic and dissonant leaden grooves saturated with creepy higher string patterns so often redolent of Eastern mystique; like having Immolation perform in unison with snake charmers. Scads of strings being stretched, warped, bounced, throttled, and bent into incalculable forms. Tapping rituals (like in "Obscura" itself) abound. You've still got the recurrent pinches and squeals so important to provide that 'cartoon' level of intensity amongst the brutal death metal regulars, but they very much fuck around with the conventions to provide a more 'popping' resonance, such as the intro to "Faceless Ones" or the mesmeric atonal spikes in the bridges of "Sweet Silence". The rhythm tone is a bit cleaner than usual, and combined with the discordant writing it brings to mind post-punk/noise rock units like Barkmarket, Zeni Geva or the Unsane, but fear not, because aesthetically, it's far heavier than the stock, underwhelming Morrisound production on the debut.

Another immensely important player here was bassist Steve Cloutier, whose tone is just as loud and present as the rhythm guitar. He anchors each groove with thick, poignant plucking that would rival any shitty nu metal outfit, and at times comes off like a jazzier, hammering Blacky (circa Voivod). The lines don't stray heavily from Lemay and Steeve Hurdle's pondiferous drudgery, but they're just so dense and well conceived that I could probably listen to the guy playing along to Patrick Robert's beats in "The Art of Sombre Ecstasy" or the phenomenal "Earthly Love", and still be as fully entertained as I am by several of the older Primus records. As for Robert: where was this guy hiding before, and where has he been since? Though it helps that the production of the bass drum and snare is so clear and concise, the guy can seamlessly thread blast beats or double kick fragments into various unusual time signatures and phrases, while keeping a sort of tribal vibe all along. If a university campus in the lost city of R'lyeh had its own hippie drum circle meeting at night with peace pipes to lament their psionic oppression at the hands of the Old Ones, this man would be it.

If I have one complaint about Obscura, it's simply that being clocked at an hour (with twelve tracks), the disc in summation seems overlong. A handful of the groove riffs dispersed throughout feel somewhat redundant to others, even if they aren't technically the same, and the better tempos and note progressions could have been condensed to the point that perhaps two tracks were cut off, tightening it to about 50 minutes of material. Also, the sputtering intensity of the viola used in "Earthly Love" is so brilliant that I rue the decision not to use it elsewhere throughout the track list. Alien guitar synths (as those on Pestilence's divisive Spheres) or proggy keyboards wouldn't have hurt the record in becoming even MORE unreal and otherworldly, at the risk of pissing off the purists who hate those sorts of dressings. Also, I really wish there were more whipping, wild lead sequences spat forth throughout (like that in "Subtle Body"), or perhaps some jazzier fusion guitar scriptures worked over the roiling rhythm chords. As far as Obscura goes outside the genre's comfort zone, there are moments I wish it went even further...

But apart from those quips, I would not hesitate to dub this one of the more interesting (and one of the best) death metal works of the later 90s, and the surreal, experimental lyrics are just icing on the cake, whether they be experimenting with Latin (the title track), spiritual chemistry, sorrow or undeath. The album isn't immediately inaccessible to the point that it turns away those who would listen to it, but its puzzle of barks and howls, repugnant bass/rhythm guitar twists and turns and tubes (like a sonic aorta), and magnanimously cluttered (on purpose) drumming has proved rewarding. Fifteen years later, I'm still getting something new out of this record across occasional listens, and it's Gorguts' crowning creation to date.