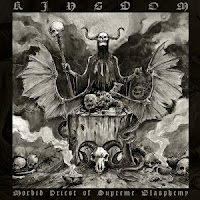 Kingdom's 2008 debut Unholy Graveyard set the band apart from a great deal of its Polish peers, thanks to its unapologetic adherence to primal traditions. Old school to a fault, it was a fun time that went largely unsung in an age where new death metal records fall like raindrops on a limited audience that can't possibly catch them all in their ears. Morbid Priest of Supreme Blasphemy seeks to supplement its predecessor with an even more raucous atmosphere, incorporating grinding tremolo riffs, a very natural drum sound and monstrous multi-tier vocals which attack the listener from a number of gruesome angles. It's not exactly a 'breakthrough', and it's hardly unique when one picks it apart, but there is no doubting the sophomore functions as a trip down memory lane, only one in which the listener is being pursued by a psychopath stalker.

This is accomplished through a crud-encrusted, wretched guitar tone which zips along menacingly as a robust mutation of Repulsion and Cianide. The riff progressions veer between all-out blasted assaults like "Syn Ognia" in which a simple line of notes is repeated to a tinny sounding blast beat; or ominous and evil grooves that occasionally reminded me of Carcass' Symphonies of Sickness, only with different production. The murky bass-lines are constantly audible (often given their own space like the intro to "Supreme Blasphemy") and the drums, in particular the snare and kick during blasted sequences, seem like they're being played out of the room next to you. To be frank, I felt like the down tuned, squelching and squamous rhythm guitars often broke the levy of the beats, but they still function in conjunction. Leads are also pretty sporadic here, screaming and swerving all over the place to provide a looser, unhinged atmosphere, and you'll occasionally pick out some string of eerie notes that, while intended to hover off in the backing din, add an entirely other level of depth to the already harried compositions.

But all of these facets are secondary to the morbid, unintentionally hilarious vocals, which balance off a gurgling low guttural with a more sinister, mid range rasp and some more standardized growling in between, not to mention the 'whispered' textures. It's almost like the Four Horsemen of the Apocalypse holding a conversation about what to destroy next and then breaking out into song when the guitars become too fun not to ignore. When I said 'unintentionally hilarious', I mean like the chorus to "Morbid Priest" itself, which is adorable in a human-sacrifice kind of way, and very much characteristic of the ritualistic horror inherent in the lyrics and subject material. They also pull off yet another pretty sweet cover. On Unholy Graveyard they had tackled Angelcorpse, but here they bust out a solid rendition of Nihilist/Entombed's "Supposed to Rot" and really make it their own with the gut wrenching guitar tone, blast beat and over the top vocals. Like Kingdom's originals, it's appreciably crude and incendiary all at once.

Morbid Priest of Supreme Blasphemy might not ultimately prove the most memorable experience, but like its predecessor, the raw authenticity and flesh-ripping aesthetics are certainly enough to consider a solid recommendation for fans of retro death. Sure, it's got the usual sonic cues to Incantation and Autopsy that are so popular in this generation, but the fact that I also heard a hint of Demilich, Carcass and others did help to balance it. Won't say it's better or worse than Unholy Graveyard, or that it's the best ghouls' night out you're likely to have this year, but fans of Cianide, Necrocurse, Disma, Krypts, Pseudogod, Blasphemy, Hellvetron and others would do well to at least check it out.