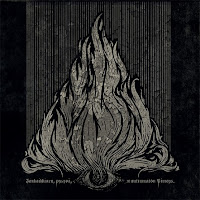 The full-length debut of Finland's Arsonist Lodge is a solid study in how to temper traditional black metal aesthetics with just enough traces of atmospheric ambiance and ritualistic abstraction that the core riffing, as familiar as it seems, still comes across fresh and abusive. Combine some of the straight, mid-paced rocking chord progressions you'd have expected from Hellhammer or Darkthrone in their prime, with faster, fluid tremolo sequences redolent of Mayhem around the De Mysteriis dom Sathanas era, and you've got the foundation. Then atop this, place some occasional blood-mortared bricks of brooding, chanted male vocal harmonies, slower doom-informed passages which give the experience a very dusty, ancient haze, and a consistent enough sense of riff variation through the 35 minutes that even the longer cuts won't wear out their welcome. Sure, if you've been combing the realm of Scandinavian black metal for the past two decades, then this is hardly news, but Iänkaikkinen, pysyvä, muuttumaton pimeys is fully aware of its intentions, doubly aware of its limitations, and hits a lot of the right notes even when it's traveling along its most conventional vectors.

Yes, for myself, the most intriguing piece here was "The Arsonist" finale, six minutes plus of psychedelic, funereal organs lurching along to a minimal beat with the gravelly, yet clearly intoned vocal incantations which all ends in the crumbling and crackling of some sacrificial blaze. But that's not to sell short the dirty grooves of "Unleash Armageddon", which is both inaugurated by swells of tonal ambiance and continue to infuse swarthy panned noises alongside the cruising chord selection and hellacious rasp; or the nefarious grooves and spurts of threatening, descending melody that characterize "Instrument of All-Evil". The drums have a great, authentic 'in the room' feel to them which works well in conjunction with the fuzzed-out but polished rhythm guitars, lowly curbing bass-lines that occasionally poke through the riff progressions, and the central snarl that ranges between Burzum, Horna or early Darkthrone in pitch. The clean vocals, as used at the onset of the album ("Intro"), are surprisingly folksy and compelling, quite like a lower-register version of a band like Týr, which you usually don't hear in tandem with the more traditional second wave style of black metal composition that Arsonist Lodge generally writes in; but elsewhere, tracks like "." compensate with fairly straightforward volleys of thundering velocity and aggression.

The other 'distraction' here is the Satanic ritual narrative "Prayer I", which is either convincing or comical, depending where you stand on the subject; yet consistent with the lyrical themes elsewhere on the album. But ultimately, I can't summon up too many complaints with this disc. The riffs are never exemplary or original, but they shift around enough in tempo and structure to never trigger the peals of ennui that often accompany albums of this sort. There are some disparities between the pure atmospheric tracks and their black metal neighbors, that is to say the 'flow' of the album isn't always comprised of seamless transitions, but regardless I appreciated the dynamic differences. The harsher vocals didn't quite stand out to me here, being typical for the genre, but then I'd also find it difficult to imagine another style here, and at least they throw out those tasteful cleans to bait us along. Lastly, some purists will no doubt find the production and guitar tone less harrowing and ghastly than several of the band's Finnish peers over the last 10-15 years, since it often thrives off a melodic sensibility nearly as warm as later Sargeist; however, it wasn't much a bother for me, since I do not naturally have a preference for one approach or the other, so long as the music is good. And it is.