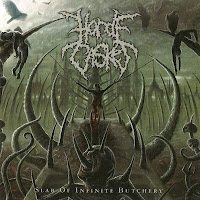 Slab of Infinite Butchery lands Horse of Casket firmly in the company of many of its gruesome peers in the 21st century: visually, aesthetically and aurally brutal enough to draw the eyes and ears of those on the prowl for more of that pummeling intensity that bands like Suffocation, Deeds of Flesh, Cryptopsy, Dying Fetus, Internal Bleeding and Cannibal Corpse made manifest through the 90s. Once again, the band has a great album title that immediately begs attention, and they recruited the inimical Jon Zig to create one of his better cover images, a plaza of ghastly impalement that seems as if you're staring into one of the public works of the Abyss, or the Nine Hells themselves! Relevant to my own interests, and no doubt to the scads of salivating gore mongers who devour Sevared offerings such as this, like slices at an afternoon pizza buffet.

At the cost of alienating some minority who enjoyed the drier early 90s din of Landscape of Cadavers, this is a work of hostile clarity. The bass drums are quite deep and fulfilling, and you can really feel the pump of the bass guitar lines racing along the underside of the harried, spurious rhythm guitar. The broad, guttural breadth of the vocal creates a more ominous narrator into this torture porn underworld, and they've got a little more of the toilet bowl swish that is so rampantly popular. But most importantly, the whip-like passes of lead guitar are brighter and more audible than on the debut (one of my major complaints there), and the overt increase in dynamic range among the riffs is far more demanding of a listener's attention, without sacrificing the overall brevity of the album (excluding the bonus demo tracks). Slower, chugging sequences are far more gut churning and slammable (if not at all unique), and the pinches and squeals spike straight into the ear. The blasts here, while also not incredibly distinctive in a field of comparable acts, are steamrollers against which the winding labyrinth of guitars pop and smear.

Not that all the whirlwind athletics of the instruments manifest into truly memorable progressions, but I can say I wasn't bored whatsoever through the half an hour or more of newer material. A lot of the riffs could truthfully be interchanged between tracks, and though the song duration runs from a briefer 2 minute burst ("Nemesis Delivered to the Parallel Crypts") to a voluptuous five minutes ("Cardiopulmonary Regurgitation") there isn't a massive difference in direction. That said, they've given themselves more room to play around in, and Horde Casket is nothing if not immediate and exciting. They don't hover around into the later rounds waiting to wear you out; they present you with a flurry of fists straight away, going for the TKO. Clearly there are some parallels to the sounds of West Coast acts like Severed Savior, Sepsism, Inherit Disease, Pathology and so forth, in just how ruthless and contemporary Slab of Infinite Butchery comes across, but at the same time it remains loyal to the 90s forefathers. Pretty cool, but primarily targeted at an audience used to such a relentless architecture.

The aforementioned bonus tracks hail from their 2008 promo disc, and are largely redundant with the debut album, but they fit in well enough and many people picking up Slab of Infinite Butchery are unlikely to have even heard Landscape of Cadavers; but as one might expect, they're not the equal of the busier, better joints they'd written for the sophomore. All told, this is a solid step forward for Horde Casket, even if it does still lack the incredibly sticky songwriting or the virtuoso-level progressive elements present in other acts like Decrepit Birth or The Faceless. Fans of Abnormality, Deeds of Flesh, and anything else I listed above should at least check the album out, and if they continue this steady inclination for their third full-length we could be in for a teeth-hammering, brain-mulching treat.