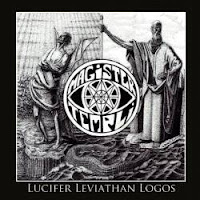 Scandinavia is certainly leading the charge in this new wave of occult themed heavy/doom metal bands, with names like Portrait, In Solitude and Ghost generating a great deal of buzz. No doubt Magister Templi will also be written into this category, due to the lyrical themes and the overt influence of Mercyful Fate, but I can't say that these Norwegians feel like a disposable rehash of any of the aforementioned; and with a bit of refinement and sharpening, they could very well become one of the greatest riff monsters in that particular scene. Alas, I'm not sure Lucifer Leviathan Logos will prove the group's ticket to the big time, because it seems marred by one of its most prevalent components to the point that I found myself distracted away from the excellent guitar progressions, dwelling a bit too much on the vocals of the Abraxas d' Ruckus.

This is a case where both their production and inflection really threw me off from the supporting instruments. It's not that Ruckus is incapable of holding a notes or shifting pitches, but there's just something really strange about his intonation and enunciation of particular English words that seemed alien to me. Now, granted, it's quite likely that this is a secondary language for the guy, and normally I enjoy such little quirks, but paired up with the placement of certain lyrical lines, and the lyrics themselves, the experience became disjointed. For one, he seems erratically loud and separate in the mix of the recording (especially in the 'narrative' part in "Master of the Temple"). The guitars and drums are clearly audible, and strong enough that it's not a deal breaker, but he just seems like he's singing in a different space. His tone falls somewhere between Bobby Liebling of Pentagram, Robert Lowe of Solitude Aeternus, Mark Shelton of Manilla Road, and the more operatic doom stylings of the earlier Candlemass records. With a little bit of an Ozzy lean in the actual structure of delivery. Loud and clean overall, but aside from the earlier issues, he also sounds too forced when he's shitting into his upper key, and while 'charismatic' I just felt like there wasn't enough inherent anger and potency in his voice to convince me. Perhaps not awful...

However, the riffs are so great through this album that I felt like they deserved something more. Largely rooted in traditional 80s heavy metal, I definitely picked up a Danish or old Swedish vibe redolent of Mercyful Fate, King Diamond, Mercy, and other bands of that nature. Riff progression choices might not always be original, but they're rather refreshing just the same. The 80s are being used as inspiration, not just a source for ripping off aesthetics, but I enjoy the dirty grooves and rhythmic punctuation that often recalled Michael Denner and Hank Shermann in their prime. Not to mention the authentic, down to earth production of the guitars; not too polished, not too grimy, just right. Bass and drums are groovy if not necessarily as standout as the rhythm guitar, and the whole thing feels like this burly time machine tweaked on the occult nostalgia of simpler years. The music could definitely use some better leads as dressing for the superb rhythm tracks, but there's enough melody running through the riffs to somewhat compensate. The samples and atmospheres are a bit strange (like the intro to "The Innsmouth Look"), but functional, and the evil acoustic guitar that inaugurate the closer "VITRIOL" are proof positive of what potential these guys have as raw composers.

If I was to judge Lucifer Leviathan Logos simply on the rhythm guitars, I might award it flying colors, but as a whole package, there was just something still nagging me about the vocals the entire time. Not that they're necessarily annoying, mind you, and one does get accustomed to them after a few spins of the album, but still I just don't think they're the greatest match for the music. The high end transitions, enunciation and lyrical arrangements need some work. Otherwise, Magister Templi has the chops to prove itself in this rapidly expanding niche. The Lovecraft, Crowley, and horror lyrical themes are par for the course, but on the other hand...they're par for the course.