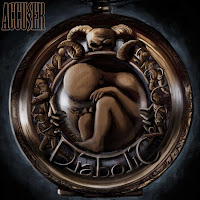 Long banished to the lower tiers of Teutonic thrash, Accu§er have had a career of peaks and valleys, though the peaks were never high enough above sea level for most to notice. They hit a sophomore summit on their 1989 effort Who Dominates Who?, a decent approximation of speed and thrash inspired by Metallica and other West Coast US acts rather than their local, better known German peers. But it wouldn't be long until they felt the sting of the 90s, experimenting with some pretty rank groove and thrash hybrids, quite a lengthy sting of poor to mediocre efforts that further hampered their progress and potential (to the point that they even changed their name). At some point last decade, though, the fires of 80s thrashing inspiration were once again lit beneath their bottoms, and they began releasing a series of new albums that, gradually, better integrated their earlier style into a modern milieu...a streak that continues with Diabolic, which not only gives a sound whooping to its predecessors Dependent Domination and Agitation, but trumps everything else thus far in their career.

You read that correctly: Diabolic is the first Accu§er of notable quality, so solidly crafted and meticulous in its production and presentation that it's damn near 'great'. Not that it's remotely original, or album of the year material, but this is the first time in memory I can actually recount listening through one of their records and then immediately wanting to play back through it. The balance of aggression, melody and finesse is no longer plagued by the lazy, 90s groove elements. At most there are 2-3 such riffs executed tastefully over an hour of content, but the vast majority of the songwriting is smugly nestled in the band's roots, only jazzed up with some superb production values that give it a modernized context so that you never feel as if you're listening to some 'old' record or a mindless retread. The palm muted charge patterns are heavily reminiscent of Master of Puppets-era Metallica (so I admit to some favorable bias there), with an occasional mix-tempo rouser redolent of Exodus or Testament (like the verse riffing in "Dethroned"). Even better, though, are the varied and amazing harmonies and melodies that spring up all over the foundation, like joyous flowers blooming through the pavement cracks. Whether it's the chorus spikes ("Diabolic" itself, perhaps the greatest song this band has ever recorded), gladiator harmonies ("Deification"), blazing and compelling double tremolo picked progressions and wigged out staccato screams (both also in "Deification"); or anything else they hurl out there, it almost always sticks...

Definitely summoned up some comparisons to the past three, great Paradox records with a few hints of Deathrow and Vendetta in their prime, thanks to the surgical skills on parade. Yet Accu§er manages to distinguish itself through the harsher vocals, which are aggressive barks similar to Max Cavalera if he'd been raised in Germany and not Brazil. Incredibly consistent, and often Frank's accent gives a little charm as when he enunciates the three 'w' sounds in the chorus of closer "World Wide Violence". The drum mix on this thing is fucking unbelievable, and when cranked to high volumes you can just hear the wind spinning off the snares, kicks and cymbals. Like the whole thing is hammering at you from a speedway or air strip. The bass lines are corpulent and constantly throbbing under the rhythm guitar, but I wouldn't say the lines were ever that interesting, just playing along and giving a bit more depth to the kick drums and chugging patterns. They also pull off a pretty nice acoustic guitar intro to "Apocalyptic Decay" that offers some foreshadowing to the level of musicality found thereafter. Honestly, I've heard a lot of younger bands like Warbringer and Evile try to pull off this post-Metallica or 'Bay Area' sound, and while they might be angrier or more energetic, the songwriting skill just never quite hits this level.

I struggle even to put together any viable complaints about Diabolic. A lot of the tracks are around 6-7 minute in length, and while they never exactly bore me, I suppose they could be tightened and trimmed down to chop off maybe 10-15 of the lesser inspired moments. Some of the lyrics are also pretty cliche from line to line, and music as good as this deserves some more imagination. But otherwise, this is a long overdue triumph for a band that I'd long written off since hearing them as a teen. Dependent Domination definitely had its moments, but this disc smooths out all the rough edges and had me headbanging for most of the play length. It's not the sort of thrash that would likely impress fans of highly technical fare like Vektor, or those who want dirtier, 80s speed metal production and raunchy Venom-like vocals, but has a lot to offer an audience still fond on Master of Puppets, Practice What You Preach, Fabulous Disaster, etc. Hell, this is even comparable in quality to the latest Destruction, Kreator, and Tankard efforts, all of which I more or less enjoyed. Persistence, once again, pays off. Well fucking done, and better late than never.