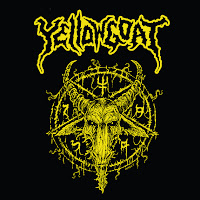 I should preface this review by stating that I'm not the biggest Toxic Holocaust fan on the block. I've bought a couple of the albums, and I think Joel Grind is unquestionably one of the more passionate, likeable and devoted figures in the thrash revival of the last decade, but the songs are really hit or miss, with a bunch of riffs I've heard before and most of the same rehashed song titles and nuclear/Satanic lyrical themes I've seen time and time again since the 80s, when they were actually somewhat novel in appeal. However, I'll occasionally latch onto a few of his tunes due to their fiery energy, and the fact that they seem more sadistic and sincere than much of the fashion-obsessed hi-top, denim and battle jacket scene I've heard in the last decade. And also, while you could always hear the usual traces of Slayer, Venom and Possessed in his writing, it's a bit harder to pin him to any one in particular. Not so much of a 2.0 or an 'also, bro!', but a pastiche of vicious speed/thrash traits.

I'm not sure that The Yellowgoat Sessions distinguish themselves heavily from the Toxic Holocaust canon. Add a bit more clarity to the guitars. Meat and thrust. Dial back some of the vocal distortion and you've got yourself something similar in its old school sentiment and living tribute to the 80s. But Joel wanted to create something more primitive and barbaric, in which the speed metal elements shine through, and the vocals take on a more sinister, black metal aesthetic. Considering the cult followings that have sprung up around some comparable acts like Midnight or Speedwolf, the timing is right for such a project, but at the risk of its seeming trendiness, Yellowgoat is admittedly a pretty fun way to kill 25 minutes, and revel in the past from which it is heavily drawn. Whether you actually 'were there' or are just pretending to be, this is a dynamic if niche set of songs which spans from uptempo Motörhead barnburners ("Vengeance Spell"), paeans to early Venom ("Hail to Cruelty") or Destruction ("Grave Encounters"), to slower black-based constructions that come across as the bastard children of Darkthrone and Hellhammer ("Foul Spirit Within", etc). Basically, if you're idea of a good time is spending the night in a brothel with Welcome to Hell, Sentence of Death, Iron Fist, Kill 'Em All and Obsessed with Cruelty, then pack some condoms, brothers and sisters.

Or don't...but then don't blame me for whatever results. Grind spins an arcane fuzz onto the rhythm guitar which manifests into that raw, buzzing wasp roadster appeal of an age when the gain was the pain, and a metal band wasn't relying on dense blockades of butcher block distortion to bring the menace. Leads are stripped down to earth, with the same general tone only brighter due to their placement on the higher string frets, but the rhythm riffs burn asphalt through the abyss. Yeah, so the guitar progressions themselves are insanely predictable, especially the more punk-oriented patterns, but the production does a great deal to compensate since it seems so viral and fresh. Bass grooves plunk along and often offset the rhythm guitar with some decent fills that Cronos or Lemmy would be proud of, and the drums have a nice live appeal, an organic calamity that doesn't really race beyond the boundaries of the genres 25+ years ago. Joel's voice is slightly more textured and distorted than what I'm used to from his mainstay Toxic Holocaust, and he does a serviceable job even if the actual intonation becomes monotonous over a number of the verses/choruses.

I like that he grafted a tinge of extra atmosphere to the music like the cleaner, horror-melody guitars in the bowels of "Foul Spirit Within" or the noise intro/outro pieces "Ascension" and "Descension". Helps to give the entire album a creepier package deal than if he was simply laying out the raw retrospective. "The Eternal One" is also an interesting inclusion with its tempered war-drumming, harsher vocals and the bolder epic black/doom structure...eventually with some whispered narrative and a bell-like tone ringing out. While it's internally consistent, The Yellowgoat Sessions definitely paces itself with ample variation. But despite the immersion I felt in listening, I just wasn't left with much of a lasting impact. Too few of the riffs are catchy enough to continually revisit, and the album seems to thrive more on atmosphere than anything else. You could listen to Antichrist's Forbidden World or Deathhammer's Onward to the Pits and get both the comparable antiquated vibes and far more intense riff-writing, so this might not prove enough for Joel to quit his 'day job'. But it's still pretty fun, and retrophiliacs everywhere will undoubtedly enjoy it for its mood.